Sometimes even the dead seek salvation.

In 1925, eighteen-year-old Ameerah Arrowood is murdered in an insane asylum. She finds herself transported to a dreary realm that turns out to be a recruiting station for the dark spirits. With animosity in her heart toward humanity, she decides to join them.

For the next ninety years, Ameerah possesses soulless humans, living a hedonistic, mischievous and sometimes vengeful existence, but now she's seeking salvation so she can crossover and save her lost love who is stuck in the lower world.

Ameerah enlists the help of her dark spirit friend Derek, who is straddling the line between Heaven and Hell. She tells him how it all began, weaving between historical timelines to now, hoping to gain understanding about why her parents betrayed her and wanting to get rid of the guilt weighing on her heart. In the end, the unexpected unfolds, throwing Ameerah a curve ball which changes her forever. 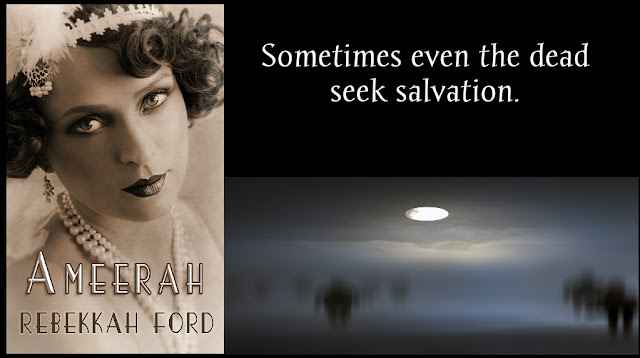 Rebekkah Ford grew up in a family that dealt with the paranormal world. Her parents Charlie and Geri Wilhelm were the directors of the UFO Investigator's League in Fairfield, Ohio. They also investigated ghost hauntings and Bigfoot sightings in addition to extraterrestrial cases. Growing up in this type of environment and having the passion for writing stories is what drove Rebekkah at an early age to write tales dealing with the paranormal world. Her fascination with the unknown is what led her to write the Beyond the Eyes trilogy, its companion Tangled Roots, and Ameerah.

Rebekkah resides in rural North Dakota, in a farming community of about 1,800 people and loves where she lives. She has an irreverent sense of humor, loves coffee, and yummy food makes her happy. She also loves books, history, antiques, animals, connecting with her fans and other authors, as well as watching her favorite TV shows.

presented by WLKBookPromotions.com
Posted by Unknown at 01:00