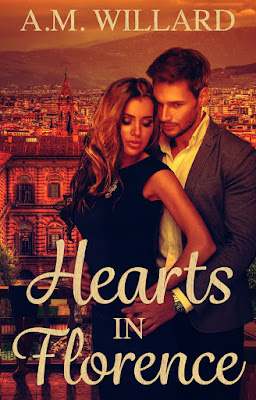 Raven Bloomberg finds herself stuck in Florence, Italy during a holiday weekend. One meant for lovers, not lonely art gallery assistants sharing the last hotel room with a dark and mysterious stranger.

She decides to loosen up and enjoy what the city has to offer. The only problem is; she may be enjoying herself a little too much.

Pierce Ashton's eyes are set on Raven Bloomberg, the sexy yet reserved blonde that pushes him to limits he never expected. Will their thirst be enough to continue the love affair once back in the states?

Will these two souls go back to living life as they did before, or embrace the passion ignited in the opulent streets of Florence.

Find out now in author A.M. Willard's contemporary romance novella, Hearts in Florence, which is best enjoyed with an Italian Merlot.

“Come, I want to show you my favorite section here,” he says while dragging me behind him. Now it’s as if he’s a kid in the candy store. Laughter escapes from me while I’m being pulled. I glimpse back and forth between everything as it’s covered in greenery and wonder what it would’ve been like back in the day. As we slow, I notice the Ragnaie up ahead, and I pray that he’s going to say this is his favorite spot. I really want to walk underneath it.

“You coming?” he asks, tilting his head in that direction. I offer the biggest goofy smile ever and follow along. I take in the green trees that cascade over the gravel path making a canopy above our heads. The sunlight peers through open sections of the trees above, creating a spotlight effect down toward the road as we walk along. Pierce takes my hand into his and squeezes it a little more than he has before. I close my eyes and glide through as I imagine being here with my fiancé or lover in the future. We could come here for him to kneel down and propose to me, or to celebrate our first year of being wed.

I stop and breathe in the air around us. I want to memorize this moment for as long as I can. I want to remember exactly what it smells like, the sounds of the birds chirping, and the slight creaking of the branches. I picture that it’s the sound of the branches intertwining more into each other, forming a tighter bond than before. The hopeless romantic in me wonders if that’s the sound that two lovers’ hearts make. When two people who love each other unconditionally grow old together, do their branches mend together to make a canopy of their souls? 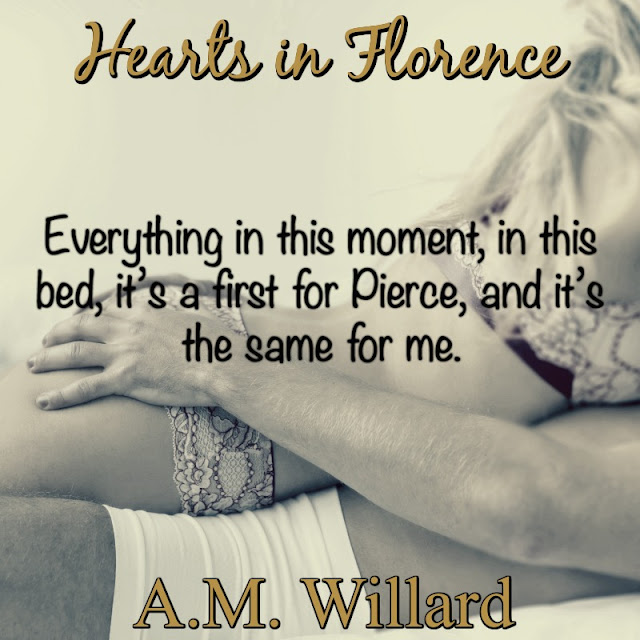 A.M. Willard is a true believer of soul mates, and happy ever afters. She enjoys reading, sailing, and of course writing contemporary romance with some saucy scenes. Releasing her first novella of the One Night Series on April 12, 2014 has sent her on a new journey in life.

A.M.'s passion for writing started at a young age, but with the love and support from her husband of eighteen years pushed her to follow her dreams. Once she hit that first publish button, she hasn't looked back.

Publications available from A.M. Willard include the Chances Series, Love on the Screen, and everyone's favorite, the One Night Series. She's also had an article published in the Writer's Monthly Review Magazine and was just accepted into the Romance Writers of America organization in May of 2015.

A.M. Willard was born and raised in the Panhandle of Florida, but resides in Savannah GA with her husband, son, two cats, one rotten dog, two goats, and her six chickens. Yes, we said chickens...