That’s all it takes to change your life.

What happens when your entire future is on the line because of one reckless moment? This is what Breanna Miller and Thomas “Razor” Turner have to face in Katie McGarry’s Walk The Edge. Blackmail, family secrets, future plans on the verge of collapsing, two people who aren’t supposed to be together fall in love, and the power of social media in defining who you are when you’re not even sure who that person is yet…Join the Club and and immerse yourself in the world of the Reign of Terror. Pick up Walk The Edge today!

One moment of recklessness will change their worlds

Smart. Responsible. That's seventeen-year-old Breanna's role in her large family, and heaven forbid she put a toe out of line. Until one night of shockingly un-Breanna-like behavior puts her into a vicious cyberbully's line of fire—and brings fellow senior Thomas "Razor" Turner into her life.

Razor lives for the Reign of Terror motorcycle club, and good girls like Breanna just don't belong. But when he learns she's being blackmailed over a compromising picture of the two of them—a picture that turns one unexpected and beautiful moment into ugliness—he knows it's time to step outside the rules.

And so they make a pact: he'll help her track down her blackmailer, and in return she'll help him seek answers to the mystery that's haunted him—one that not even his club brothers have been willing to discuss. But the more time they spend together, the more their feelings grow. And suddenly they're both walking the edge of discovering who they really are, what they want, and where they're going from here.

And don’t miss the first book in the Thunder Road Series,
Nowhere But Here!

"There's something about McGarry's writing that's totally enthralling. Her characters are vivid, flawed and riveting, making this is a truly amazing read!"~ RT Book Reviews

"Katie McGarry is a master of her craft! Raw emotion, pure grit, I hang on every word. Her characters are real people with real problems and I cheer them every step of the way. Ready for a new addiction? Look no further than Katie McGarry's books."~ Gena Showalter, Bestselling author of Firstlife

"I finished Walk The Edge by the amazing Katie McGarry. It was SO good that now I feel bereft. I already miss Razor & Bre - I need to know more! She is by far my #1 favorite author. She paints a picture with the words, puts you IN the story... Love." ~ Lori Foster, New York Times Bestselling Author

“This is going to be the best night of our lives,” announces Reagan. Addison sits at the desk in front of me and Reagan’s to the left of Addison.

I check the clock on the wall over our English teacher’s desk. In exactly two minutes, the bell will ring and the first day of my senior year will begin. It’s not only the first day of school, but also the first Friday of the school year.

Three years ago, Addison, Reagan, and I promised we’d do something crazy on the first Friday of our senior year. After notifying High Grove that I declined their scholarship, crazy is exactly what I need. “Are you sure your parents aren’t going to check on us?”

“Trust me, everything will be golden.” Reagan uses the camera on her phone to fix stray pieces of her dirty blond hair. She curled it this morning and much to her displeasure the curls are falling out. “Has Cass started following you yet? I told her you created a Bragger account.”

I sigh and Addison scowls. She’s less than thrilled with my lack of excitement. I currently have twenty-five followers. It’s better than none, but not nearly reaching Addison and Reagan’s totals. Not sure how this whole social media thing is supposed to be fun. It’s like being back in elementary school and waiting to be picked for kickball.

“To gain followers you must post something.” Addison has this teacher to pupil reprimand going on, and it’s scary on her. “Don’t make me start posting for you, brat. You’re the one that wanted to join the world. Reagan and I are trying to catch you up on how to participate in the land of the living.”

“Because everyone will love reading how I was up doing dishes until midnight,” I say.

“Tell them you were doing it naked and half the boys in school will follow you.” Reagan tosses me a sly smirk and I laugh. She’s always saying things that push the envelope. “Tell them you’ll post the picture if you reach five hundred followers. Watch your stats climb, girl.”

“That would be interesting.” A new voice joins the conversation.

I see the jeans first. Actually I see a rip in the jeans, and that rip is an inch above the knee, and I’m staring at a very muscular male thigh. I enter this weird zone, because there’s this sinking feeling of where this is heading, and ominous sirens are sounding off.

It’s like being stuck in slow motion as I glance up. My heart stops. Starts. And when it starts again, I find I can’t breathe. Golden hair that’s a little long on top. Light blue eyes drinking me in. All I see is a whole lot of gorgeous…and dangerous.

It’s Thomas freaking Turner. He wears the same leather vest that he had on the other night, and underneath it is a black T-shirt with the name of an old-school metal band. My eyes automatically scan his patches and I wonder which one is the warning that he carries a gun.

His fingers skim my desk as he strides past. There are small cuts on his knuckles, and the skin on his hands look rough—like him. For some reason, I find that attractive. It reminds me of him hunched in front of his bike yesterday as he was repairing his machine. The steady way he moved. The serious set of his face. The way the muscles in his arms flexed as he worked.

“Hello, Breana.” Thomas’s voice is deep, smooth and feels like a caress along my skin. 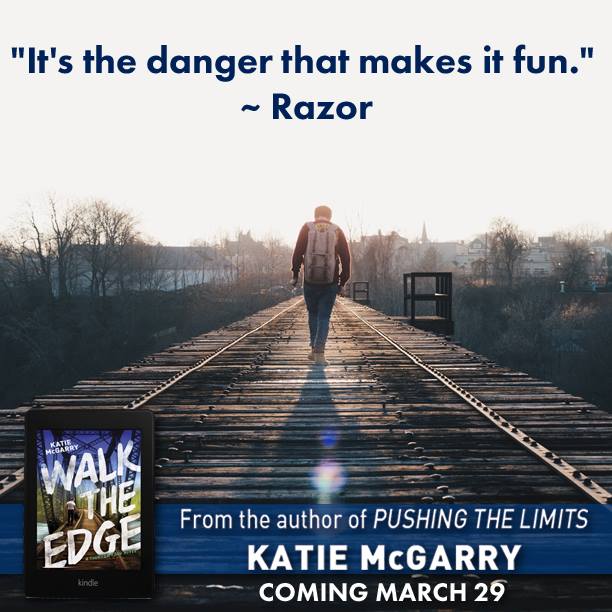 
Order Walk The Edge by April 1st and receive an exclusive Echo and Noah short story and a chance to be in the next Thunder Road novel!

Katie McGarry was a teenager during the age of grunge and boy bands and remembers those years as the best and worst of her life. She is a lover of music, happy endings, reality television, and is a secret University of Kentucky basketball fan.

Katie is the author of full length YA novels, Pushing The Limits, Dare You To, Crash Into You, Take Me On, Breaking The Rules, and Nowhere But Here and the e-novellas, Crossing The Line and Red At Night. Her debut YA novel, Pushing The Limits was a 2012 Goodreads Choice Finalist for YA Fiction, a RT Magazine's 2012 Reviewer's Choice Awards Nominee for Young Adult Contemporary Novel, a double Rita Finalist, and a 2013 YALSA Top Ten Teen Pick. Dare You To was also a Goodreads Choice Finalist for YA Fiction and won RT Magazine’s Reviewer’s Choice Best Book Award for Young Adult Contemporary fiction in 2013.