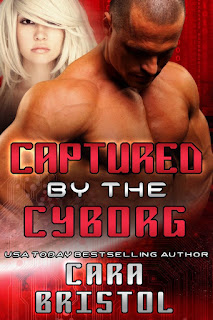 Sometimes the biggest risk is to one’s heart….

An ex-Cyber Operations field agent, Dale Homme has kissed danger and betrayal more times than he cares to count. Now he runs a clandestine factory beneath the surface of the moon Deceptio, where confidentiality and security matter more than anything. When a beautiful young woman arrives seeking a job, Dale knows within minutes she’s lying. Everything about her is false: her past, the people she claims to know, her reason for being on Deceptio. Illumina Smith? Even her name is an alias.

Logic says send her packing. His gut says she’s in trouble. She needs him. So he’ll do anything to keep her safe….even if it means keeping her captive.

Captured by the Cyborg is third in the Cy-Ops Sci-fi Romance series but is written to be read as a stand-alone novella.

Captured by the Cyborg is available in ebook and paperback. 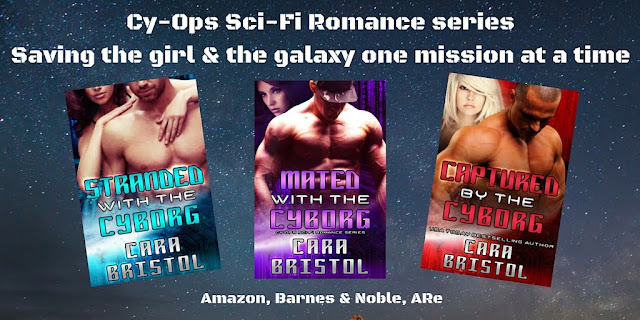 Cara Bristol: I hear you accepted a new job. A computer troubleshooting position with the Moonbeam spacecraft remanufacturing factory. Congratulations.

Illumina Smith: Thank you. It surprised me when I received an offer. I got the impression Dale Homme, the boss, didn’t think I was right for position.

Cara: Why would you think that?

Cara: You falsified your credentials?

Illumina: Everything on my CV was false except for my age. Even my name is an alias.

Cara: Why would you do that?

Illumina: I needed a safe place to hide. Moonbeam is located a kilometer underground on the moon Deceptio.

Cara: So you’re not qualified to work on spacecraft?

Cara: But what if Dale Homme finds out you falsified your resume?

Illumina: He won’t. I plan to avoid him as much as possible, anyway. When I shook his hand at the interview, I discovered he’s a cyborg, a scientifically enhanced human. He has a microprocessor in his brain. Cyborgs and computer sensates do not mix. For his safety, I need to keep my distance.

“Do you understand how isolated you’ll be if I hire you for this position? You won’t be able to leave the facility until your furlough. You’ll work here—and live in the employee barracks. For months at a time, you won’t see sunlight, hear a bird chirp or an insect sing, or feel the wind on your face. You’ll be stuck with the same people day in and day out—and, by the way, there will be no natural rotation to mark the time. Day and night are controlled by artificial lighting and work schedules. The only visitors to Deceptio are pre-approved buyers or sellers. For security reasons, you won’t be permitted contact with any outsiders, including your family.”

Her lips twitched with a slight smile. “You make it sound so appealing.”

“Many people can’t handle the isolation. We lose a lot of good employees to moon fever.” He opened up a hailing frequency in his cyberbrain and fired off a couple of messages.

She leaned forward. “I mean it.”

Why would a young woman leave a prestigious, lucrative job to live in an artificial environment beneath the surface of a barren moon? Moonbeam paid as much if not more than Infinity, and offered generous leave, but that was the extent of the perks. For a programmer starting out in her career, Infinity was the better choice. Which led him to believe she was running from something, rather than to something. “Tell me about your educational background.”

She eased back, but her spine didn’t touch the frame of the chair. “I graduated with honors from TCI.”

“I got that from your CV. What was your favorite class?”

“I was on the computer security track, but I also mastered all the computer languages.” A response, but not the answer to his question.

Ping! Ping! Both his messages came back with replies. He read them while continuing the interview. Multitasking was a cinch for a cyborg. “You must have taken Professor Annabel Harriot’s class. She’s a friend of mine.”

Illumina nodded, her face flashing that luminescence that caused her to glow like a pearl. “I learned so much from her. She’s….tough, but respected.”

“So you think you can handle this job?”

“If I were to offer you the position, when could you start?”

“Immediately. I, um, brought my suitcase. I don’t even need to return home.”

Interplanetary hiring laws dictated what an employer could or couldn’t ask a prospective job seeker. Dale knew the rules, but he hadn’t gotten where he was by following them. Cyberoperatives worked outside the law, as did spacecraft chop shop owners, so he had no qualms about asking whatever he needed to gather the necessary info to facilitate his decision. “What species are you exactly?”

“Ter—” She dropped her gaze to her lap, where her hands locked together. She raised her eyes and bit her lip. “Faria,” she admitted in a low voice.

It was one of the few truths she’d uttered during the entire interview.

Annabel Harriot did not exist; he had made her up. The professor was as fictitious as the qualifications on Illumina’s CV. His contacts at TCI and Infinity had reported they’d never heard of Illumina Smith. To their recollection, she’d never attended the institute or been employed by the AI corporation.

Dale Homme made a life skirting the law with Cyber Operations, but now that he is retired, he runs a chop shop on the moon Deceptio. He still skirts the law but life is a lot less dangerous and a bit more mundane. Sure life still has it's treacherous encounters, however something is missing and he can't pinpoint what it is exactly.

Illumina Smith is running from her past and her running had led her to Deceptio. She hopes to hide out for awhile until it is time to move on. Life on the run isn't what she dreamed of, but circumstances have led her down this path.

Dale can tell by looking at Illumina that she's lying, but there is something about her that he can't let go of. Maybe by keeping her around, he'll be able to find out what she is hiding and possibly help her.
But his body's reaction is beginning to cloud his judgement when it comes to her. He's never been like this with anyone, what it is about her that calls to him? However, he's not the only one having issues, Dale has awaken something in Illumina and she can't seem to shut it down.

As time goes on and the more time they spend together, Illumina starts to trust Dale and confide in him her problems. Dale vows to protect her at all costs, but he's going to be away for a few days so he call in reinforcements. With all the security measures in place, what could go wrong?

Everything since the person they least expected to deceive them just put them all in jeopardy. So can Dale make is back in time to save Illumina before it's too late?

Jesus, Buddha, Lao-Tzu! Cara has another thrilling hit on her hands! Dale Homme is the hero worth swooning over and over again. He's tall, dark, handsome, protective, and oh so sexy. And when he's committed, he's all in heart and soul. Making sure his lady love is happy and protected is paramount to him. He'll melt your heart right along with your panties.
Illumina is stronger than she gives herself credit, it takes fortitude to run and fight for her life. And when she sees an issue with security, I love her sense to protect those around her even without their knowledge. And when she's taken hostage, I love her resilience to fight for herself even if it means never seeing the one man she loves again.

This book is exhilarating and holds you captive until the end. The chemistry between Dale and Illumina is intoxicating on so many levels, you can't help but be drawn to them and want them to achieve their happily ever after. This quick read will leave you craving more for this sultry couple.