"I finished Ginger's Heart last night, and I am completely and utterly in love." --Mia Sheridan, NY Times bestselling author

Once upon a time there were two cousins:
one golden like the sun,
one dark like midnight,
one a protector,
one a predator,
one a Woodsman
and
one a Wolf…
both owning equal,
but different,
parts of a little girl's heart.

In this modern retelling of "Little Red Riding Hood," the woodsman and the wolf are cousins, and Little Red is the girl with whom they both fall in love.

Beautiful Ginger McHuid, daughter of Kentucky's premiere horse breeder, grows up on her family farm, best friends with Cain Wolfram, the son of her father's Stallion Manager, and Cain's cousin, Josiah Woodman, son of a local banker. Throughout their happy childhood, the three are inseparable friends, but as they mature into adults, complicated feelings threaten to destroy their long history of friendship and love.


This is a standalone novel inspired by Little Red Riding Hood. New Adult Contemporary Romance: Due to profanity and very strong sexual content, this book is not intended for readers under the age of 18.

(The next standalone a modern fairytale novel, Don't Speak, inspired by The Little Mermaid, will be released in 2017.) 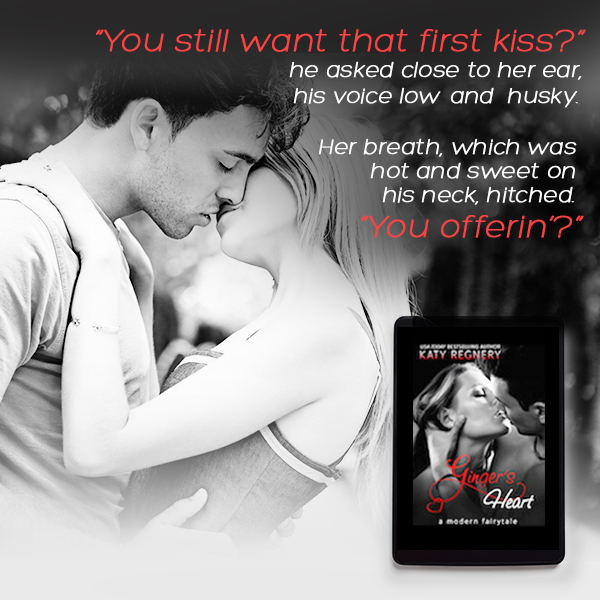 This book is full of angst, heart, and soul. The love story that is at the heart of this book is completed encompassing. You can't help but feel for Ginger on her journey through self discovery and becoming an even stronger woman in the process. Both men are unbelievably sexy and only want Ginger to be happy, no matter which man she ends up with. And in the end, you know that she picked with her heart. The one she didn't, you feel for him but know it was the best choice.

Katy's writing is intriguing and provocative. The flow of the story will keep you glued until the end. The dept of the characters will tug at your heartstrings. I look forward to reading the rest of her Modern Fairytale stories. 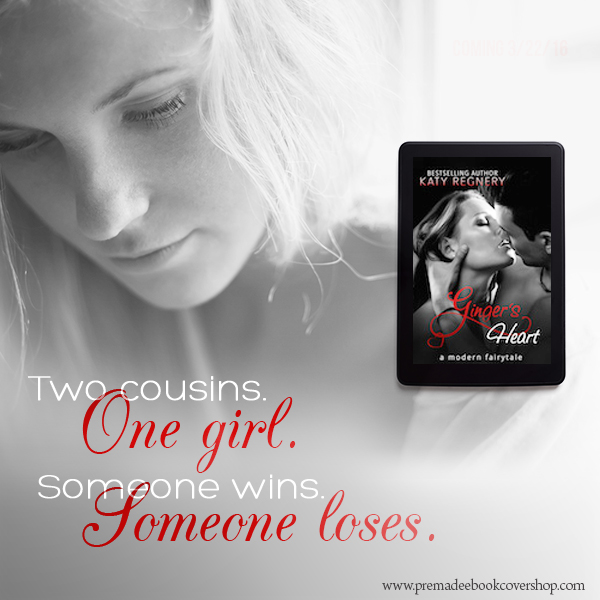 The Vixen and the Vet is included in the charity anthology Hometown Heroes: Hotter Ever After, and Katy's novella "Frosted" appeared in the Jan '15 anthology, Snowy Days Steamy Nights. Additionally, Katy's short story, "The Long Way Home" appeared in the first RWA anthology (Feb '15), Premiere. 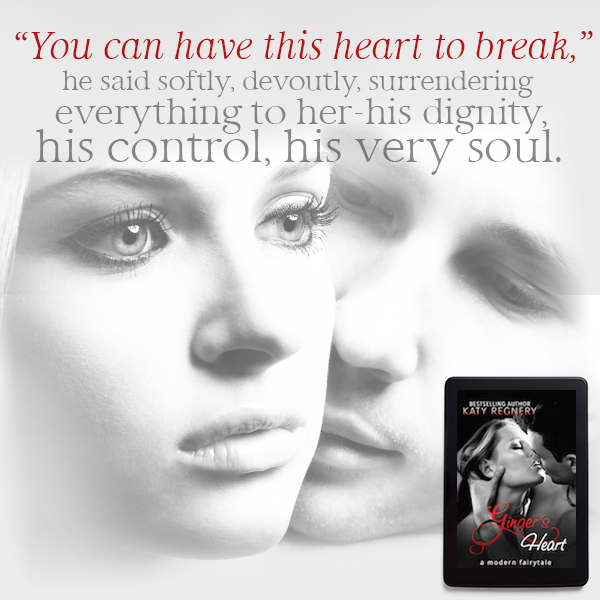 An hour later they stopped by the Glenn River, eight miles downriver from Ginger's house and two from the distillery where Cain had partied last night.

"We should water them," he said, reining in Thunder and dismounting with the ease of a lifelong horseman.

She reined in Heath, who nickered in protest, and grinned down at Cain who reached up for her. His hands lingered for an extra moment on her hips as she slid down the front of his body. Leaning her head back, she stared up at him, daring him to pull her closer, to kiss her, to admit that this whole "friends" thing was bullshit on fire. But, he clenched his jaw, cleared his throat and dropped his hands.

"Thanks," she murmured, her voice husky in her ears as he stared down at her, his eyes flinty and dark.

Taking Heath's reins with a grunt, he turned away from her, leading the horses to the river's edge and leaving her to follow behind. She leaned down to pick up a flat stone and skipped it across the slow moving water.

"You were always the best."

"Nope," she countered, picking up another stone. "Woodman was good, but you were better. Remember that Fourth of July that you skipped eleven times? Eleven times. It was a record."

Satisfied that the horses were calm and drinking their fill, Cain leaned down and grabbed a rock of his own, skipping it over the dark water.

"Wow!" she said, clapping lightly. "You've still got the touch!"

"I'm gettin' a kick out of you right now, princess."

A charge zapped between them as the words left his mouth, and her breath hitched and held for just a moment, but she looked down and picked up another rock. She was enjoying today too much to go back to Awkwardland.

She skipped her rock, which sunk after three measly hops.

"Remember when you saved my Cabbage Patch doll from certain doom in this river?" she asked him.

He screwed up his face as her. "Wasn't me. Must have been Woodman."

"Savin' a dolly? Please. That has Woodman written all over it. I couldn't have cared less if it drowned."

"But I cared," she said softly. "Which is why you saved it."

"Fine. Have it your way," he said, sitting down on a large rock near the water's edge.

She sighed, squatting down to wash her hands in the clear water before looking back at him. "Why do you do that?"

"Let Woodman take credit for all the good things?"

He shrugged, looking away from her, out at the water. "I don't."

He sighed, giving her a long-suffering look. "If somethin' good happened, chances were, it was Woodman's doin'."

"How do you figure?"

She stood up slowly, turning her body completely to face him. "Do you really believe that?"

"Cain. Cain, look at me." Her words didn't feel like enough so she beseeched him with her eyes too. "You're just as good a man as he is."

"Ha!" scoffed Cain, standing up and moving away from her. "Not in this life, princess." 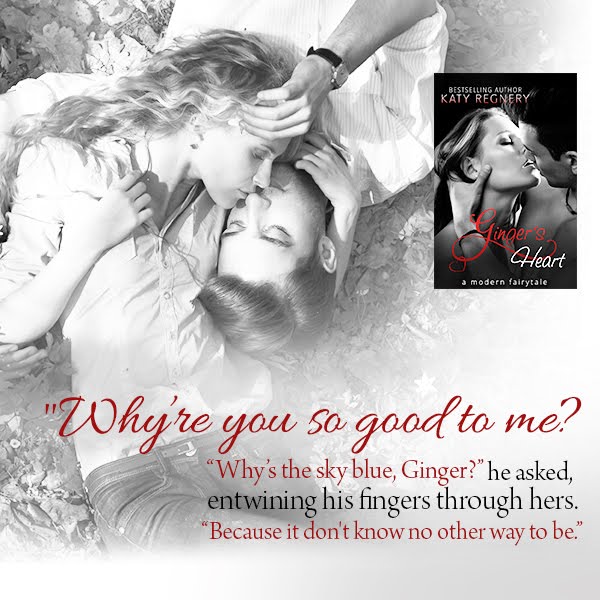 More from the “A Modern Fairytale” Collection from Katy Regnery

The Vixen and the Vet

"With Southern charm and a deeply romantic plot, readers will fall in love with this modern day fairy tale." --RT BOOK REVIEWS 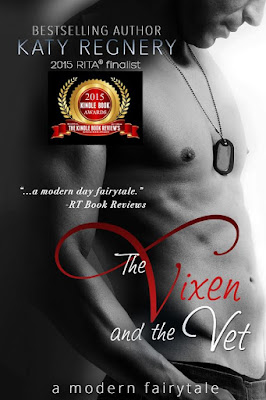 In this modern-retelling of "Beauty and the Beast," Savannah Carmichael, betrayed by an unreliable source, returns to her hometown of Danvers, Virginia with her once-promising journalism career in ruins. Given the opportunity to get back in the game by writing a patriotic human interest piece, Savannah turns her attention to the town hermit, Asher Lee, a wounded veteran who returned to Danvers eight years ago, and hasn't been seen since.

After an IED explosion in Afghanistan took Asher's hand and disfigured half of his face, he's lived a quiet life on the outskirts of Danvers where the locals respect his privacy...that is, until Savannah Carmichael comes calling in a borrowed sundress with a plate of homemade brownies. When Asher agrees to be interviewed by Savannah, he starts feeling things for the beautiful reporter that he hasn't felt in years.

Misfits in small-town Danvers, Savannah and Asher create a bond right away, touching each other's hearts in ways neither thought possible. When a terrible mistake threatens to drive them apart, they'll have to decide if the love they found in one another's arms is strong enough to fight for their hard-won happily ever after.

The Vixen and the Vet is a standalone novel inspired by Beauty & the Beast. Contemporary Romance: Due to profanity, realistically depicted scenes of war and very strong sexual content, this book is not intended for readers under the age of 18.

All novels in the ~a modern fairytale~ collection are written as fundraisers. 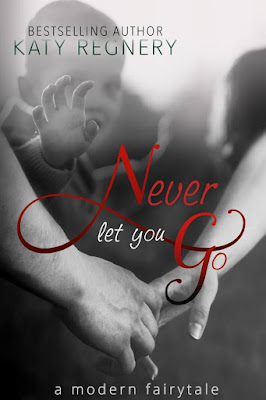 In this modern retelling of Hansel and Gretel, 13-year-old foster children, Holden and Griselda, escape from their abductor after three years of brutal captivity and try to cross the Shenandoah River on foot. Tragically, one of them makes it to safety but the other is left behind.

Ten years later, Griselda’s boyfriend drags her to a fight club grudge match where her world is turned upside down when she watches Holden step into the ring.

Though the connection between them is fierce, bitter regret, simmering rage and a cache of physical and emotional scars lie between them, just as dangerous as the whitewater of the Shenandoah.

Never Let You Go is a story of fear and hope, defeat and survival, and two people - once profoundly broken – who discover that love is the only thing that can make them whole again.

This is a standalone novel inspired by Hansel & Gretel. New Adult Contemporary Romance: Due to profanity, scenes of physical abuse and very strong sexual content, this book is not intended for readers under the age of 18. (Note: children are notsexually abused in this book.)

In June and July 2015, 25% of all gross royalties were donated to Operation Underground Railroad (a partner of the Elizabeth Smart Foundation). 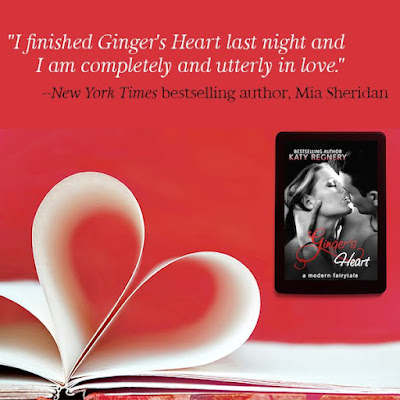