**Note: ARCS will not be distributed until 3/18 to allow every reader to experience the full book at On-Sale.**


In this modern retelling of "Little Red Riding Hood," the wolf and the woodsman are cousins, and Ginger is the little girl who claims both of their hearts.
Cain.
Woodman.
Ginger.
When three children grow up together in the rolling hills of Kentucky horse country,
One becomes a predator
One becomes a protector
And one becomes prey.
Ginger McHuid has been in love with the "Dub Twins" – Cain Wolfram and Josiah Woodman – for as long as she can remember. And for as long as the cousins can remember, they've each loved Ginger in their own all-consuming ways.
One will win her
One will be cast away
While one follows her heart.
Ginger's Heart


This is a standalone novel inspired by Little Red Riding Hood. New Adult Contemporary Romance: Due to profanity and very strong sexual content, this book is not intended for readers under the age of 18.

(The next standalone a modern fairytale novel, Don't Speak, inspired by The Little Mermaid, will be released in June 2017.)

Ginger's Heart is part of the a modern fairytale collection, which will include four standalone, unrelated novels:

The Vixen and the Vet is included in the charity anthology Hometown Heroes: Hotter Ever After, and Katy's novella "Frosted" will appear in the upcoming (Jan '15) anthology, Snowy Days Steamy Nights. Additionally, Katy's short story, "The Long Way Home" appeard in the first RWA anthology (Feb '15), Premiere. 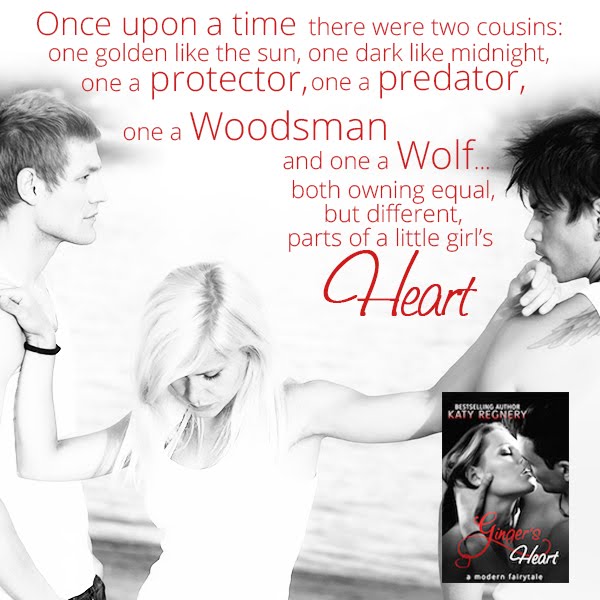 
Excerpt from Chapter 1 of Ginger's Heart, a modern fairytale, by Katy Regnery.
All rights reserved. Used with permission.

Just about everyone called Woodman "Woodman" except Gran and sometimes Cain. Gran insisted on calling him by his Christian name. Cain used "Josiah" and "Woodman" interchangeably with no real rhyme or reason that Ginger could follow.

"Rumor is you're gonna marry Josiah someday," said Gran, her sixty-something blue eyes merry. "But what do you say?"

Ginger giggled self-consciously, thinking about her grandmother's question, something clenching in her twelve-year-old heart as she thought about marrying sensible Woodman and abandoning her wild feelings for his cousin, Cain.

"I don't know," she said, feeling her forehead crease in confusion.

"Or maybe you're thinkin' you want to marry…Cain," said Gran softly.

Cain, with his jet black hair and ice blue eyes, appeared like a vision before her, and Ginger's heart thumped faster. The way he'd run off to see Mary-Louise Walker this afternoon made her brown eyes spitting green with jealousy. The way he swaggered made her breath catch. Woodman was so predictable, so safe in comparison.

Then again, Woodman hadn't exactly been predictable this afternoon, had he? He'd surprised her with the gift and even more with his words. His body had been hard and warm when he'd held her, the embrace awakening something new and foreign within her. Something she wasn't sure she wanted. Something that didn't feel safe and even scared her a little bit. She pulled her fingers away from the charm bracelet and faced her Gran.

Her grandmother's eyes, which had been mostly teasing, flinched, and her mouth tilted down in a sympathetic frown, which made her face seem so serious and sober.

"Choose, dollbaby," said her Gran. "Someday you'll have to choose."

The same feeling that she'd had in the barn, when Cain had yelled, "Jump to the one you love the most, darlin'!" flared up within her—a fierce refusal to love one cousin more than the other, to give up one in lieu of the other.

Choose? Her memories skated back through a dozen years on McHuid's Farm that had always included Cain and Woodman. When they were little children, they played together, swimming buck naked in the creek and racing over the green hills and pastures in impromptu games of tag. As the boys grew up, they started working with Cain's daddy, Klaus, who was her father's right-hand man, mucking out the stables and grooming the horses. She'd run down to the barn every day after her lessons to see them, working right along beside them until they were all covered in hay, dust and barn grime.

Though the Wolframs weren't generally included in the McHuid's active social life, the Woodmans were, which meant that in addition to seeing Cain and Woodman on the farm, she also saw Woodman at every holiday and birthday party…and they always managed to slip out unseen with some smuggled sweets for Cain.

They were the Three Musketeers of McHuid's Farm and Ginger knew both boys as well as she knew herself—Cain's smirking, hot-headed, impulsive ways, and Woodman's level-headed patience, caution and kindness. Regardless of their differences, she also knew that as the only children of twin sisters, Cain and Woodman were much closer than most cousins. Genetically speaking, they were half-brothers, and while they surely liked to tease and torture each other, they wouldn't hesitate to jump into front of a train to save the other's skin either.

In Ginger's mind, she envisioned them like two halves of the same coin that she held carefully in the palm of her hand.

She loved them both desperately.

No, her heart protested. Impossible.

"What if I can't?" she whispered, leaning back and resting her head on her grandmother's comforting shoulder.

"Then you'll lose them both," said her grandmother softly.

Ginger's shoulders fell, relaxing in surrender as she closed her eyes against the burn of tears.

"But don't let's think about that now, dollbaby," said Gran, leaning her head upon her granddaughter's, the constant tremble of her unpredictable body almost soothing to Ginger as they rocked side by side in the twilight. "You're just twelve today. You've got your whole life ahead of you."