✮✮✮ "Explosive and intriguing...sinfully sexy, scorching hot and oh, so mysterious!" ✮✮✮ ~ Give Me Books


Michael Sloan is all of the above, with a hard tough edge to boot. He's not the guy he used to be. Years ago, before all the s&%t went down, he was laidback, carefree, and even happy-go-lucky.


Life changed him. Hardened him.


There's one woman though who can break down his walls. Someone who knew him then. Who can reach inside to that heart he protects fiercely...because she's the only one he ever gave it to. When they collide, it's tender and savage, gentle and rough, and makes them both hungry for more of this electric, once-in-a-blue moon kind of sexual chemistry. But it's a battle of wills between Michael and the woman he loves, with words and emotions held close to the vest.


She doesn't believe she can ever move on from her own heartbreak, but when Michael makes her feel for the first time in years, it's both thrilling and scares the hell out of her, setting off all her flight instincts. He's determined not to lose her again, but he'll have to learn to let her in if he ever wants to fully heal from the past...


The problem is, she knows something about the night his family shattered. She has the missing puzzle piece...but neither one of them realizes it.


Add it to Goodreads!


The price of Sinful Love will go up to $4.99 (US) at the end of release week! Grab it before the price goes up this week!

This was just a fucking kiss.

But it was so much more.

He’d never kissed like this before. Fierce and greedy. Needy and dreamy.

He wanted to live in this kiss.

At some point, he broke the contact, because he had to. Because another second of her kisses would be too much. He brushed her hair away from her ear. “You keep doing that, and we’re going to be putting on a show.”

She grinned naughtily. “I think we already did,” she said, glancing clandestinely over her shoulder. Some of the other passengers seemed particularly engrossed in their screens and books, as if the sight of the two of them devouring each other had been too much to bear.

He repeated it close to her ear, flicking the tip of his tongue over her earlobe as he said those words to her.

She shivered visibly. “Mon dieu. I love the way you say that.”

“But see, Annalise,” he said, running his index finger across her top lip, “I love the way you say it. I want to make you feel that way.”

“You do,” she whispered, her accent thickening, and he knew she was heading down the same path he was already on.

He slid into another question. “How do you say ‘fuck me harder’?”

She shivered and answered, “Baise-moi plus fort.” 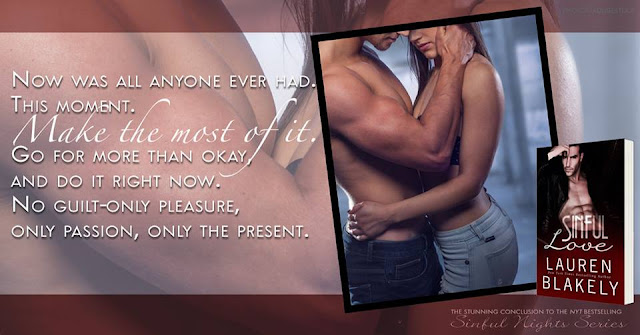 And that’s not all!


✮✮✮ Enter to win a signed set of the Sinful Nights Series! ✮✮✮ 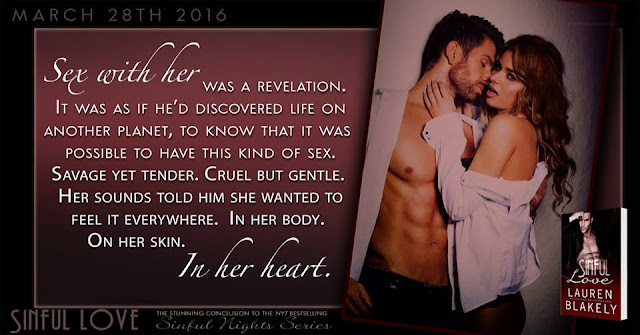 Michael Sloan, the oldest of the Sloan siblings, is coming face to face with the one woman that got away. Repressed feelings will be brought front and center, but will the memories live up to the present?

Annalise Delacroix is back in Vegas for a few days and looking up her one time love is high on her priority list. Single for the past two years, is her heart ready to find love again or will her broken heart always stand in the way.

Life, time, and distance got in the way so many years ago. Can young love be ignited again into something more this time around? Or has too many years passed to rekindle the flame?

As Michael tries to figure out his future with or without Annalise, his father's murder case is heating up. The twists and turns will keep you guessing until the stunning end.

Lauren really knocked this series out of the park and this book is no exception. It's a heart pounding story that will rock you to your core. You'll laugh, cry, and fall head over heals in love with Michael Sloan. The passion that flows between Michael and Annalise radiates off the pages right through to the reader. There are several times I had to stop reading just to cool down my ereader and take a long cold shower. My heart breaks and then made whole right along with Michael.

The investigation will have you reeling when everything finally comes to light. Just when you think you know what will happen, be prepared to be left breathless.

The way Lauren concludes this series is tremendous and sinfully exquisite. This just might be my favorite Lauren Blakely series so far! 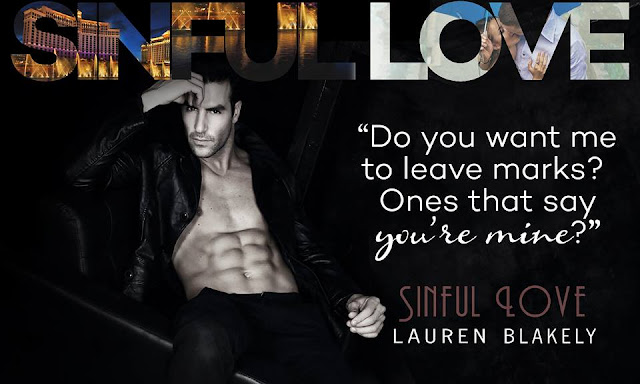 Since self-publishing her debut romance novel Caught Up In Us three years ago, Lauren Blakely has sold more than 1 million books. She is known for her sexy contemporary romance style that’s full of heat, heart and humor. A devout fan of cake and canines, Lauren has plotted entire novels while walking her four-legged friends. She lives in California with her family. With nine New York Times bestsellers, her titles have appeared on the New York Times, USA Today, and Wall Street Journal Bestseller List more than three dozen times. Her bestselling series include Sinful Nights, Seductive Nights, No Regrets, Caught Up in Love and Fighting Fire. She recently released Big Rock, a sexy standalone romantic comedy that became an instant New York Times Bestseller. In the late spring, she’ll release Mister O, another standalone romantic comedy.