Blog Tour & Giveaway ~ Bad to the Bone by Wendy Byrne 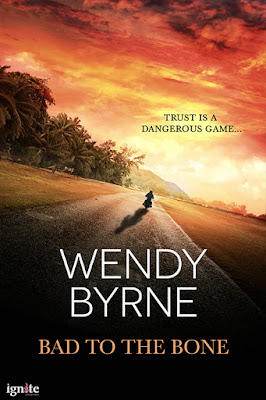 When her Uncle Jack is arrested on drug charges, Sammie Murphy hops the first plane to Key West. Being rescued isn’t on her uncle’s to-do list, though. When he admits guilt and instructs her to go home, Sammie knows with 100% certainty something is seriously wrong.

Veteran DEA agent Enrique Santos knows when a bust is solid. So why is he allowing Jack Murphy’s niece to mess with his head? He’s been set-up and nearly killed by a woman like her before, and he’s not about to make that mistake again.

But then things at Murphy’s bar take a turn for the dangerous, leaving Sammie entangled in Enrique’s dark past. Forced to second-guess his convictions, Enrique has no choice but to kidnap the one woman who could destroy everything...including his heart.

“We need to establish some boundaries,” she said, hoping to convince him. And maybe if she said it enough times she could convince herself as well.

What was that old saying something about being too late to lock the barn door? Would it even be possible to return to a platonic relationship? And if they couldn’t keep their hands off each other, what would she do? She couldn’t very well leave town with all that was going on with her uncle. Even if she fired Enrique from Murphy’s, she suspected that wouldn’t keep him away.

“I thought we agreed one time or a hundred, it wouldn’t matter. Besides, you’ve got to admit we have some amazing chemistry together.”

She nodded. “But this whole thing between us is distracting. Now that I’m thinking with a clearer head, I can see this is a really bad idea. I have to make sure I stay right where I belong—in my uncle’s apartment above the bar. It’s for the best to keep me focused.”

Enrique dropped his towel and yanked on a pair of boxers, followed by shorts. She didn’t look. Okay, maybe she sneaked a quick look. Besides, she’d seen everything he had, and it wasn’t like she was going to see it again anytime soon, so she might as well enjoy it one last time.

He might have seen her watching. She hoped not. It would make him believe he had a chance for a repeat performance. Which he absolutely did not. Okay, maybe he did. But she’d never admit it to him.

Remaining suspiciously quiet, he pulled on a T-shirt espousing the merits of exercise. His jaw tightened. “So you’re saying flings are okay, but anything more is out of the question?”

“It’s that pheromone crap that makes us think there’s more.” She shrugged.

“What do you propose we do about it?” He laced his fingers with hers.

“Ignore it and hope it goes away.”

“I have a feeling that’s not going to work, because every time I’m around you, all I can think about is getting you naked and having my way with you.” He brought her fingers up to his lips for a kiss. “Or you having your way with me. I’m not particular.” After giving her one of those orgasm-inducing smiles, he rested his hands on her shoulders.

“Maybe we should try to focus on what’s important instead of this physical thing between us. For me, it’s about helping my uncle. For you”—she waved her hands in the air as if she had no idea what he might focus on, because she knew so little about him—“whatever it is you need to do.”

He dropped his arms to circle her waist and sucked her into him. The intensity behind those coal-colored eyes made her go all squishy inside.

“And what if what I need to do is you? How does that fit into the equation?”

Wendy lives in the Chicago area. She has a Masters in Social Work and worked in the child welfare field for twelve years before she decided to pursue her dream of writing.

Between teaching college classes, trying to get her morbidly obese cat to slim down and tempering the will of her five-year-old granddaughter, who's determined to become a witch when she turns six so she can fly on her broom to see the Eiffel Tower and put hexes on people--not necessarily in that order--somehow Wendy still manages to fit in writing. She spends the remainder of her days inflicting mayhem on her hero and heroine until they beg for mercy.

She has written three books in the Hard Targets trilogy, Hard to Kill, Hard to Trust and Hard to Stop. In addition, she has two books through Entangled Publishing, The Millionaire’s Deception, and Bad to the Bone, two self-published books, The Christmas Curse and Accused, and two interracial romances, Fractured and Mama Said.

28-Oct
What Is That Book About

3-Nov
Once Upon A Page
The Book Sirens