Blog Tour & Giveaway ~ More Than One Night, A Heroes of the Night Novel, by Nicole Leiren 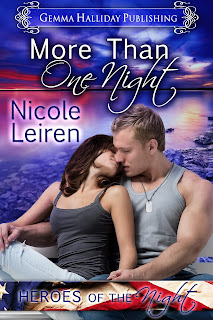 The Few. The Strong. The Brave.

Melodie Alexander, a children's librarian, prefers to live life between the pages of a book. But when the death of her best friend prompts her to step out of her comfort zone, she finds herself directly in the path of self-proclaimed bad boy, Daniel Bresland.

Daniel knew how to be a solider. Life after war? Not as easy. He served his country in Afghanistan, both in the military and as a private contractor, but fighting the war came at high personal cost. Now he's determined to keep his relationships "casual" in order to protect his heart and prevent anyone from getting too close.

A chance encounter between Melodie and Daniel on a flight to Dallas proves that opposites really do attract. But when scars from the past threaten their new relationship almost before it starts, Daniel must decide if he can risk opening his heart again to convince Melodie he wants more than one night.

If you love men in uniform and believe the night belongs to lovers, then The Heroes of the Night series is perfect for you! Stories of military heroes, sexy and flawed, and the women they love.

Subscribe to the GHP newsletter to receive an email alert when new books are available!

A Word from Nicole

And So We Begin Again…

As an author, I’ve spent many years in pursuit of the dream of becoming published. Countless hours writing, rewriting, editing, editing again (LOL) I can’t even begin to share how wonderful the journey has been, both the ups and downs.

One of the things I’ve learned is that there is always an ending and a beginning. When I typed “The End” of my first novel, I realized I had no idea where to go next. I signed up for a class at Savvy Authors, “How to write your hook, pitch and query.” During that time frame I found my agent and she offered representation. After many rewrites, lots of positive responses (but still rejections), I had to make the decision to table that book for now and start again.

At the end of 2013, I met a man on a plane who, after a very lively conversation on the way to New Orleans, inspired the idea for a new story. Ready to start a new story, I focused on getting words on the page and finding my way to “The End” again.

I was thrilled when a contract was offered by Gemma Halliday Publishing and began the journey toward the published product. More first steps. From content and line edits to ARC reviews and cover art, there were so many things to learn.

Finally, I had a release date which brought about learning for promo and marketing and the excitement of knowing that soon one of the milestones I’d dreamed about would be happening.  September 29 was a big celebration and I loved every moment of it. The festivities and events will continue throughout this next week with many more firsts.

But you know what? Once release week is over…it’s time to begin again. Thankfully, I’ve been working on Book 2, REMEMBER THE NIGHT, in the series during 2015 so the journey picks back up at putting words on the page to get me to “The End” again.

Both Daniel and Melodie are looking for new beginnings in MORE THAN ONE NIGHT and I hope you enjoy their journey toward a happily ever after!

Impressive. Not only had Daniel been a perfect gentleman thus far, but the restaurant he selected for their dinner was nothing short of amazing. Besides the stunning yet simple beauty of the exterior, the cool, dark interior of the restaurant boasted bright colorful blankets, pictures, pottery and other authentic Hispanic decorations. The food was also a little slice of Spanish heaven. "I love when they serve the chips warm."

"The only way. Don't be a wuss. Try some of the salsa verde. I bet you like it hot."

He was flirting—flirting with danger even, but Melodie couldn't resist. "I don't mind a little heat on my lips."

Daniel's eyes rolled back into his head as he groaned. "Damn it, woman, who's being bad now?"

She lowered her lashes and smiled. "Sorry. You're right. You've been on your best behavior. I should do the same."

Despite his arrogance and views toward women, his sincere compliments and effort to spend time with her had unlocked something deep within her heart. She'd been cautious for so long—fear of history repeating itself. Tonight was about the new beginning she'd promised herself. She only hoped she'd be able to see this through and not run, either physically or metaphorically, from the challenge and opportunity this man presented.

"Shall we try the getting to know more about you conversation again?"

His eyes flashed. This was one of those times the ability to read people better would help her understand what the look in his eyes meant. Making a mental note, she assigned herself the task of finding books on nonverbal communication and reading up on the subject when she got home. If the goal was to start living her life outside the pages of books, knowing how to read people would serve her well in the venture.

"What do you want to know?" She looked into his eyes, searching for some clue. Was he making an effort for her? From the little she did understand about people, it appeared that way. At least she hoped so. The gesture warmed her more than the salsa verde.

She waited while the food was placed in front of them and sampled her first taste of the enchilada. The combination of flavors, savory tinged with heat, tantalized her taste buds. "Oh, this is amazing. Another point scored for Dr. Jekyll."

He gave a slight smile. "I also get a point for not kissing you senseless in the parking lot earlier."
A quick sip of the strawberry margarita in the large glass proved a useless attempt to hide the heat spreading across her cheeks. "Maybe two." Subtract two, that is. The man could kiss. Dear God, could he kiss. Time to get the conversation back on track. "You said you were former military. What branch?"

His shoulders moved back as his chin thrust out. "Army, one hundred and first airborne division."
She sat up straighter and smiled. "That was the same division my dad served with in Vietnam. Screaming Eagles."

Laughter bubbled to the surface as she remembered all the reminders her father had given her growing up about not confusing the different branches of the military. "Yes, not to be mistaken for hoorah."

He widened his eyes before giving her a big smile. "Hell no. We don't allow marine talk around here. Do we soldier?"

The laughter escaped, and she shook her head. "Sir, no, sir."

Nicole is a debut author with her contemporary romance series, Heroes of the Night. She has been an avid reader and lover of books from a very young age. Starting with Encyclopedia Brown, Nancy Drew, and The V.I. Warshawski novels, her love for mysteries grew and expanded to include romance and suspense.

A Midwest girl, born and raised, her stories capture the love and laughter in her real world heroes and heroines.