Eliam Prince is finally where he wants to be in his late father’s shipping enterprise: at the helm and ready to navigate. However, when a mysterious car tries to run him off the road on his first day as CEO, it’s clear he needs a personal bodyguard—even if the idea annoys him to no end.

Winter Wyn has built a thriving personal security business after surviving a horrific tour in the Middle East. Eliam is just a routine middle-of-the-night call—until she arrives at his penthouse, where it’s clear her strict policy of not mixing business and pleasure with her clients is in serious trouble. Keeping this man safe—from sabotage, blackmailers, assassins, and his own stubborn pride—isn’t nearly as hard as protecting her own heart.

But as the stakes rise, Eliam and Winter have no choice but to break all the rules if they want to survive. Fans of Castle will love the sparks that fly on this most unlikely couple’s journey to their happily ever after. 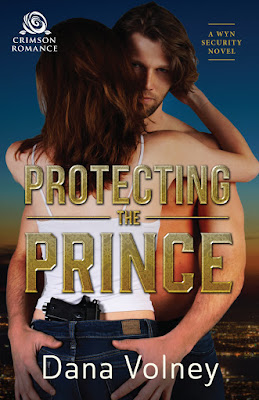 “Great, you made dessert.” Eliam spied the cookies on the kitchen counter. “I have a sweet tooth.” He grinned and took a bite before Winter could tell him she didn’t make them.

His face crinkled. “What did you put in this? Something doesn’t taste right.”

Her gaze flitted to the cookies. She hadn’t tried one earlier, but they’d smelled good. “I think they are apple-oatmeal cookies. And I didn’t make them. Your grocery service did.”

“They did?” He threw the cookie back on the counter and hurried to the sink and spat out what he hadn’t swallowed. “They only bring what I order, and a basket of any kind isn’t on my standard list.”

“What?” Her voice rose and panic threatened to take over her limbs. She ran to him before that could happen.

“My mouth.” He was grabbing at his throat and noticeably swelling lips. “I have a sesame allergy.”

His face reddened. “Epi-Pen.” His arm flailed toward his room.

“Top. Drawer,” he managed to croak out.

“Okay. I’ll be right back.” She helped him sit on the ground and lean against the bottom kitchen cabinets.

She hurried to his bathroom. Drawer, drawer, top drawer. She swallowed hard and tried to calm her breathing. Holy fuck. There were three top drawers in his long vanity. She opened the one nearest the sink and rifled through it quickly. What the hell does this shot look like? She’d never been in this situation before; she’d only seen it on TV and the movies. The first drawer contained shaving crap, so she opened the next, sticking her hands right in and messing them around in cotton swabs, hair gel, and cologne bottles. Being systematic probably would’ve been better, but Eliam was choking to death on his own tongue out there and she needed to find this blasted medicine. She threw open the third drawer, knocking it off of its tracks. She’d fix it later. There were Band-Aids, bottles of aspirin, and thank God, an orange and white shot-looking device. Grabbing it as she was almost out the door, she nearly slid on her socks rounding the corner out of Eliam’s bedroom.

She knelt beside him. Fumbled the cylinder. Eliam’s face was pale, his lips bigger than when she’d left him sixty seconds ago, and his palms sweaty. He pointed to his thigh. Oh God, she was going to have to give him this shot in his thigh. Over his jeans. She pushed it into the spot he pointed at and pressed down on the top. A small click rang out in the silent apartment and her heartbeat echoed in her ears. Eliam winced. She held it there for a couple of seconds, making sure he received all the medicine.

She cupped her free hand lightly on his cheek. Are you okay? She frantically searched his face for any signs of the swelling dissipating. His light brown eyes slowly closed.

“Eliam.” She let the Epi-Pen roll onto the floor and put her other palm on his left cheek. “Eliam. Are you okay?”

Terror welled and her throat burned. Don’t die. “Do I need to call 911?” What the hell was she doing? Of course she should call an ambulance. The man didn’t look any better.

“No,” he whispered, and reaching his left hand up he connected with her forearm and moved his fingers up slowly until his palm was covering hers on his cheek. “I’m okay.”

A brittle breath filled her lungs. Don’t cry. Don’t cry. He’s fine. This job protecting Eliam was seriously pushing her to her limits.

Dana Volney lets her imagination roam free in Wyoming where she writes romances and helps local businesses succeed with her marketing consulting company. Surrounding herself with good friends and family, Dana thrives on moments and memories created with loved ones, especially while baking. Not possessing the natural ability to want to cook every day, she still enjoys watching culinary shows while eating take-out. It helps her to dream up sweet treats and sexy men. Dana is bold, adventurous and, by her own admission, good with plants, having kept a coral cactus alive for more than one year. Find Dana Volney at her website, on Facebook, on Twitter, and Goodreads.

20-Oct
cupcakes and vodka book blog
Revenge of the Feels