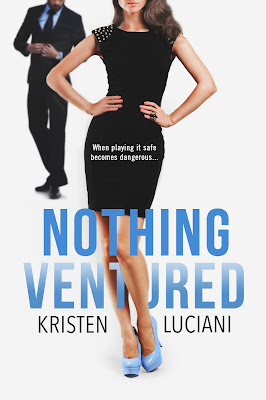 Mia Bradshaw realized long ago that falling in love is a harbinger of pain. As a single mom working for one of the most prestigious venture capital firms in the country, she doesn’t have time for serious emotional entanglements. Her sort-of–friend boy is dependable, respectful and…okay, fine, maybe a little lukewarm but whatever! Who ever said there was anything wrong with being…vanilla? It’s safe, low-risk and not fraught with conflict and heart wrenching disappointment.

Chris Camden is one of the most eligible bachelors in northern California. A successful entrepreneur with a hot car and a panty-dropping grin doesn’t need to do much to keep his bed warm at night. His smoldering hazel-eyed gaze makes women melt at his feet. No strings, no conditions, no questions - just the way he likes it. Why should he settle for just one when there are so many sizzling alternatives begging for a spin?

A coveted opportunity to partner with Chris’s company stirs up emotions that threaten everything Mia’s been so careful to protect and control. The guy with more lines than a crowded supermarket before a snowstorm can singe her insides with the slightest accidental touch, proof that she needs to steer clear.

But reality hurls a very unexpected curve ball that can change Mia’s life in a heartbeat. And sometimes…the perception of safety is relative. 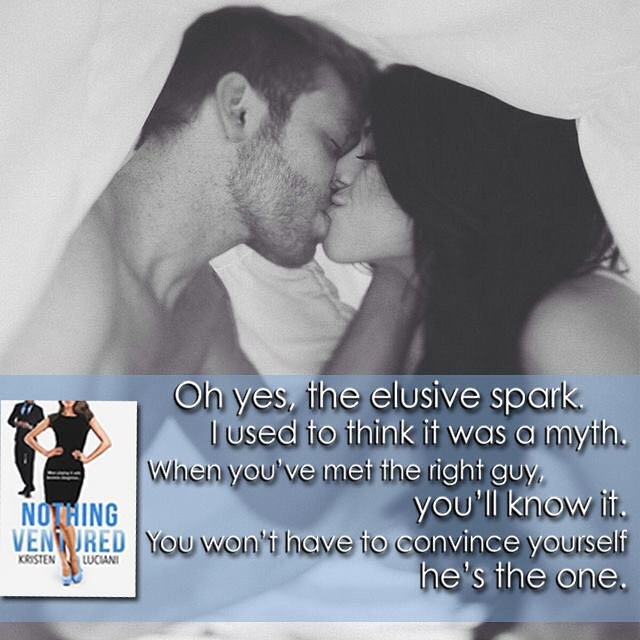 
Mia shifted her weight, noticing that, even in her highest heels, Chris was still a few inches taller. Her fingertips itched to trace his chiseled jaw. What would it feel like to kiss those lips? If she tilted her chin the slightest bit— No! Thinking like that would only lead to trouble. The objective was to keep her distance. Yes, that was exactly what she had to do. Forget kissing him. Ignore that hypnotic stare and what it was doing to the hidden parts of her body. “Um, I guess I should probably find Alex.”

“So you guys are dating.”

Mia swallowed hard. “Yes.” What more could she say? That she’d purposely left out that tiny detail because she’d been desperate to see him again? Was he angry? Would he—

“Can I get you another drink?”

He wanted her to stay! It was impossible to stop the smile from spreading across her lips. “Thanks, but I’m good. I usually limit it to one when I drive. I’m way too paranoid.”

“Well, I have more to consider now, you know?” Her voice grew soft, the words hanging between them. It was something he couldn’t possibly understand, no matter how much she wanted to make it so.

The intensity of his stare was mesmerizing, his nearness making her stomach flip around as if she was sixteen again.

“Chloe seems like a great kid. She’s lucky to have you.”

“Thanks, I feel the same way about her.”

“Come on, let me get you something… water, soda?”

“Diet Coke would be great.” Mia glanced over to where she’d left Alex. An empty glass sat on the bar, but he was gone. She bit her lip. If he came back and saw her standing this close to Chris… It looked bad, so incredibly bad but she was willing to take the risk if she could spend even just one more moment under his hypnotic spell.

“I hope you don’t mind me asking, but were you married to Chloe’s dad?”

“What happened? Wait, is it okay to ask? If you don’t want to talk about it, I understand. You can just tell me how you’re going to transform LazerShark into an international conglomerate instead.”

“It’s fine, really. He died before Chloe was born. We were engaged, and the night before we were going to fly out here to tell our parents, he died in a car accident. Chloe never got to meet him.”

Chris’s eyes widened. “Jesus, I’m so sorry. Now I feel like a complete ass for asking.”

“I guess now we’re even.” She sipped her soda and smiled. “It was horrible, but it was a long time ago. After he died, I left New York and moved back here. I was so young, barely out of college, trying to start a career. My parents live close by, and they’ve been fantastic all these years. I think it’s the only reason I still have my sanity.”

“Wow. I can’t imagine how hard it’s been for you. How do you manage everything?”

“I try not to think about it. I adore Chloe, but it is ridiculous trying to balance everything. Thank God I have so much help.”

“How does Chloe handle it?”

“She’s got a grandfather and an uncle who are crazy about her. They’ve taken on the male role in her life. But it’s not the same as having your own dad, you know?”

Chris leaned against the bar. “Yeah. My brother-in-law died about a year ago, and my sister is on her own with my nieces. I’m really close with them, and I hang out there as much as possible. I could never fill the void, but I hope at least being there helps.”

Mia’s heart ached as Chris spoke about his family. His words were laced with so much pain. “I’m so sorry to hear that. Your poor family…”

He stared into his glass and swirled the ice around. “It was really bad. My sister was a mess and the girls…they’re too young to be going through this. It’s been a crappy year for all of us.”

Instinctively, she laid a comforting hand on his arm, feeling his muscles ripple under the fabric. He slowly raised his head, unmistakable longing reflected in his gaze. “Chris, I—“

Mia jumped, guiltily yanking back her hand. Oh sweet Jesus, what just happened? She fiddled with her necklace, eyes darting around the room, anything to keep from staring. It was an act of sympathy, nothing else.

Blondie sauntered over to Chris, her blue eyes slightly narrowed as she regarded Mia. With an artificial smile plastered on her heavily made-up face, she snaked an arm through his. “I’m Lexi.”

Charming. Was she going to pee on him next? 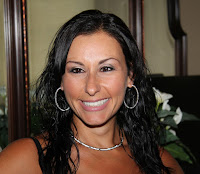 Kristen Luciani is a self-proclaimed momtrepreneur with a penchant for Christian Louboutins, Silicon Valley, plunging necklines and grapefruit martinis.

As a deep-rooted romantic who prefers juicy drama to fill the lives of anyone other than her, she tried her hand at creating a world of enchantment, sensuality, and intrigue, finally uncovering her true passion. No pun intended… 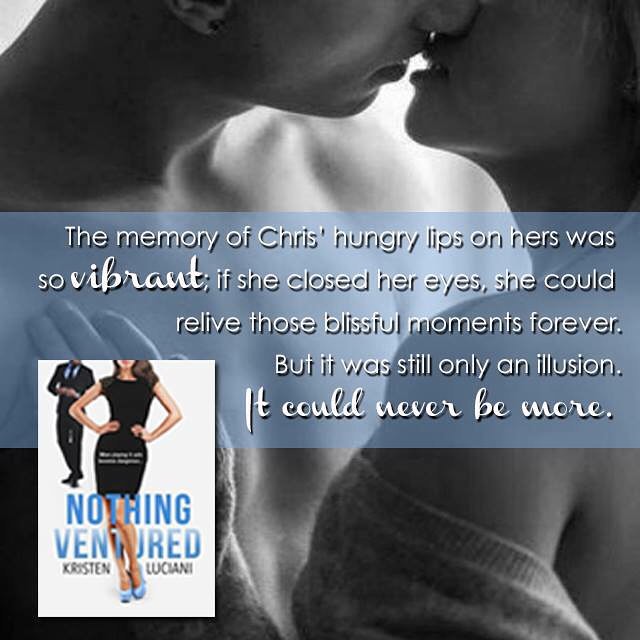 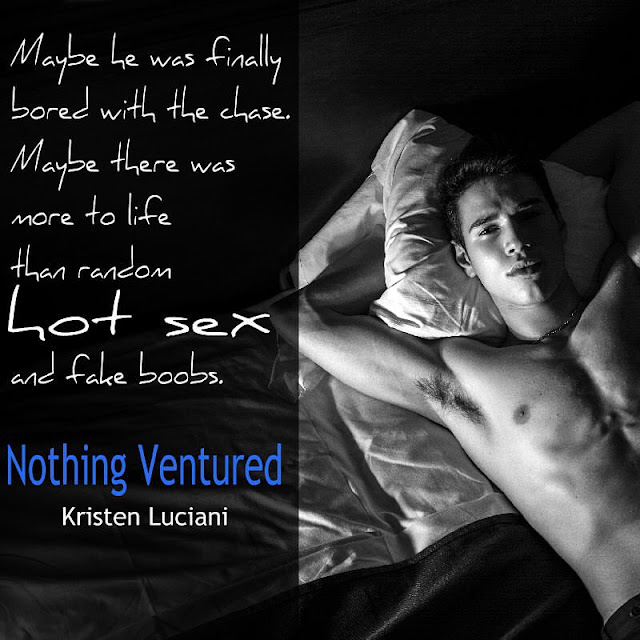 September 25th
A Reader Who Reads

September 27th
Reviews from the Heart
Got Nikki?

October 4th
Love N.Books
Books Can Take You There
A girl and her books 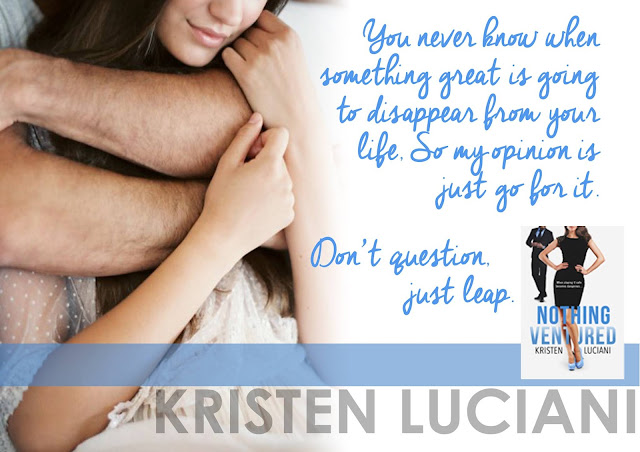