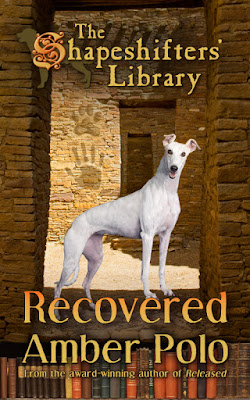 Bliss D. Light was just an ordinary children’s librarian until one day she discovered she could grow a tail. Now her life is filled with more magic than any of the fairy tales she tells the children who gather at her feet at the Shipsfeather library. Like many of the other residents of Shipsfeather, Ohio, Bliss is a dogshifter, and her newly discovered ability to change from human form into that of a sleek white greyhound has left her yearning to know more about her true heritage. The answer to all her questions, she is certain, lies with the dogshifters’ long lost Library of the Ancients and, undeterred by the fact that thousands before her have searched, she sets out to find it.

Accompanied by her best friend Harry, a disgraced werewolf/dogshifter mongrel, and hotly pursued by the evil werewolf team of Sybilla and Blaze, Bliss’s quest takes her across the sacred sites and ancient mounds of the American Southwest. Though kidnapped by dogcatchers, sold into racetrack slavery and forced to fight wolf dogs to survive, Harry and Bliss never lose sight of their goal—or each other. Because the only thing more important than finding the ancient lost treasure might just be preserving what they already have found: an unlikely love that could be the first step toward bringing two ancient enemy races together.

A burly man yelled, “I’ve got one,” and lunged at her. One gauntlet-covered hand reached out as she leapt away.

Who was he? Why was he chasing her? A dogcatcher? She’d taken a self-defense class in college but in dog form she had no hands to hit, no fingers to poke eyes, and no knees to kick vital parts. If this man were truly a dog catcher, she wished she could change into her human form. He’d realize his mistake and leave the Shipsfeather Public Library’s Children’s Librarian alone. If she uttered even one word, he’d freak out and want even more to catch a talking dog.

She plunged behind an evergreen tree. Stick held high, the man came right at her. Gathering her back legs under her, she pushed off, flying between his legs. Surprised, he fell on his backside. She ran towards the front of the library, hoping to reach the hidden entrance before the big guy caught her. Once inside she’d be safe. The dog-shifters would protect her.

As soon as her toes touched the sidewalk she galloped toward the impressive domed Shipsfeather Public Library building, which once had been a shapeshifting academy and still housed the dog-shifters and their school and library in the lower levels. She’d been the upstairs public library’s children’s librarian for five years, telling stories and decorating bulletin boards before she ever dreamed of turning into a dog.

She heard the bulky man breathing hard behind her. Then a tall thin man in a padded coat rushed at her with a huge butterfly net, his voice, gruffer and louder called, “Get ‘er, Elwood. She’d be one of them.”

Surrounded, she whirled to face the second man, bared her teeth, and tried to growl with menace. A frightened white Greyhound with her tail curled under her body until it touched her throat was not a very convincing threat. Elwood threw himself on top of her and held her down.

She gagged at his pizza breath and fought to wiggle loose, just as a third dogcatcher, a woman, opened the rear door of a white van and called to the men, “Throw her in here!” 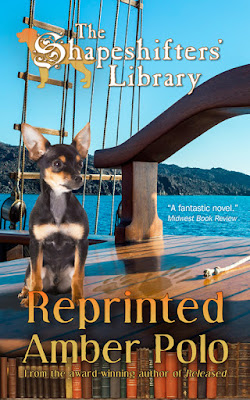 Bliss D. Light was just an ordinary children’s librarian until one day she discovered she could grow a tail. Now her life is filled with more magic than any of the fairy tales she tells the children who gather at her feet at the Shipsfeather library. Like many residents of Shipsfeather, Bliss is a dog-shifter, and her newly discovered ability to change from human form into a sleek white Greyhound has left her yearning to know more about her true heritage. The answer to all her questions, she is certain, lies in the dog-shifters’ lost Library of the Ancients and she sets out to find it.

Accompanied by her best friend Harry, a disgraced werewolf/dogshifter mix, and hotly pursued by the evil werewolf team of Sybilla and Blaze, their quest takes them to the sacred sites and ancient mounds of the Southwest. Kidnapped by dogcatchers, sold into racetrack slavery and forced to fight wolf dogs to survive, Harry and Bliss never lose sight of their goal—or each other – an unlikely love that could be the first step toward bringing two ancient enemy races together.

As the door closed behind him, his brow wrinkled and he blinked. Instead of the terrifying werewolf he’d expected, a petite young woman peered at him over reading glasses.

His eyes scanned the office the size of most New York bistros, black leather except for the red carpet
under the ebony desk and book-lined walls. Behind the desk a window framed a classic New York skyline. He squinted in the midafternoon light to see the woman who leaned over a messy pile of papers. Whoever she was, she was not Dominika Romano. Perhaps a secretary or gofer, but not the most powerful woman in a city run by powerful women.

The woman stood, her delicate body draped in a black dress, a white cardigan pulled over her shoulders.

Her voice was hesitant as she smoothed her blond curls. “I am Ms. Romano. Who are you?”

He saw a flicker of recognition in her eyes before he replied, “Pacifico Lopez, Zoogle Corp. But you’re not Dominika.” He smelled a faint scent of frangipani and his face flushed.

She snugged her sweater tight over her chest. “That’s my mother. She’s out of town. I’m Atlandia Romano. Her daughter.” Then added, “Mr. Lopez.”

Pacifico realized he was staring. Atlandia looked nothing like her mother or Sybilla. This lovely woman didn’t look like she could even be a werewolf. His face softened and he smiled, then remembered he’d come on serious business.

Behind him doors flew open and two ugly security guards entered, burly werewolves that appeared to be wolf-hyena crosses. The bigger one growled, “Want us to hurt him, miz?”

When they left, she raised her chin and asked, “Why did you come, Mr. Lopez?”

Pacifico stepped closer to the desk. “I have information that WWP operates an international ebook piracy operation. I want your mother to shut it down.”

The look on Atlandia’s face told him she had no idea what he was talking about.

“You must be mistaken, sir. This is a legitimate publishing company. Not financially successful, but I try to publish—”

The door burst open again and Sybilla Romano stepped in looking as mean as in the days she was Alpha of the Shipsfeather Pack. Her black Armani suit and knife-sharp stilettos accented her werewolf bitch style suit. Her raven chignon was pulled so tight that the edges of her darting dark eyes slanted up. “Landy, whatever is this dog doing in Mother’s office?” She approached Pacifico, looked down her prominent nose at him, and laughed. “Dog-shifters should be leashed. Or are little lap dogs an exception?”

A love of books drew Amber Polo into a career as a librarian. A greater love turned her into a writer.

She is best known for The Shapeshifters' Library series, an urban fantasy filled with books, librarians and dogs and a library everyone will love.

The mystical side of Sedona, AZ became the paranormal setting for her first novel Hearts in the Vortex. One day a plane flew past her office window and she turned her pen to her own airpark backyard and Heads in the Clouds was the result. In addition to her two novels and short romantic fiction, she is proud of her self-produced , Relaxation One Breath at a Time a CD that uses her voice to teach relaxation to calm your body and mind and/or help you fall asleep.

Relaxing the Writer: Guidebook to the Writer's High offers hundreds of tips to help writers and readers relax.

Sample her writing and see why Midwest Book Review called her work "quirky" and "profound" (is that profoundly quirky or quirkily profound?) check out her free reads and first chapters.

After living in seven states, she happily calls a small town in Arizona home.

If you have any plans to be near Village of Oak Creek in Arizona on November 7, 2015, drop by The Worm Book & Music Store and say hi to Amber.