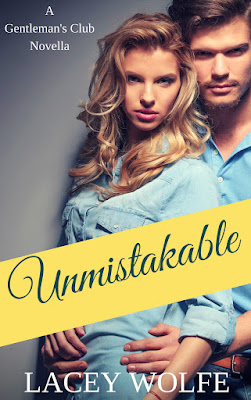 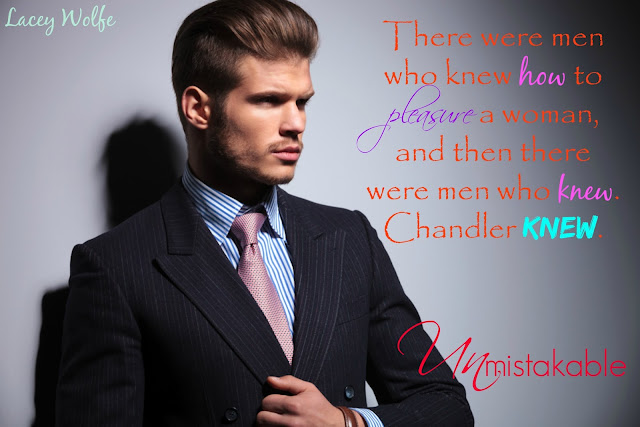 doesn’t do relationships. His life is all mapped out and with no room for a long term relationship. When he meets Jamie, feelings develop and the easiest way to handle those feelings is to end things before it gets too complicated.

Jamie has never done heartbroken and that doesn’t change when decides to end things. She picks herself back up and gets right back out into the dating world. After all, there are plenty of eligible bachelors at The Gentleman’s Club.

Before they can both walk away for good, a problem neither of them expected arises. Things heat up, lives are changed, and it all boils down to what the paternity test says.


Warning: This is a May-December romance with a hero that is going to make you hate him long before he redeems himself.

Novella and can be read as a stand alone. 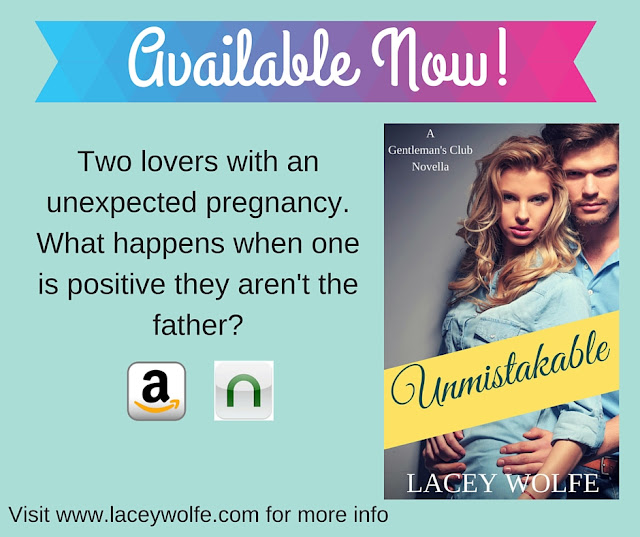 “Having a good time I hope?” Ian’s gaze swept over her body and from the expression on his face, she could tell he appreciated what he saw. Too bad the handsome man was another one who wanted to make a lifetime of being a bachelor.

“It would be better if you didn’t allow married men into the club.”

Ian shrugged. “I don’t encourage it, but they are paying customers.”

“Assholes are what they are.” She finished her beverage.

“Need another? On the house after dealing with an asshole.”

She handed him her glass. “I suppose.”

Jamie ran her hands through the top of her hair. Her dress was riding up slightly, and as she tugged it back into place, a shiver swept down her spine. She didn’t even have to turn around to know who stood just inches from her.

A hand met her waist. “You know what this dress does to me.”

She pulled away from him and turned to meet his gaze. “. How nice to see you.”

“It’s been awhile, hasn’t it?” He cocked an eyebrow.

Ian returned and handed her another Appletini. “I need to handle something. We’ll talk again soon, Jamie.”

She nodded then glanced back at . His hair was dark, almost black. He’d been coloring it, she could tell, because she couldn’t find a hint of gray. And at forty-eight, she’d expect to see some around the ears, at least.

Like he cared. She’d been his toy, that was it. She’d known it when she got involved with him; knew it would go nowhere. He’d been honest, but she’d still fallen for him. Coming here tonight had been a mistake. You didn’t just fall out of love with someone in two weeks.

reached out and tucked a strand of her hair behind her ear. “Please, don’t.” She couldn’t handle him touching her.

“I’ve missed you,” he whispered.

She shook her head and stepped back, needing space. “Don’t.”

“Come on, Jamie. Spend some time with me like you used to.”

Taking a deep breath, she glared at him. “I’m not a toy.”

Is my mouth open? She sure-as-hell felt like her chin was sitting on the floor.

“I’m sorry. I shouldn’t have said that.” stepped toward her, but she put her hand out again.

“Don’t come anywhere near me.”

Jamie quickly spun around and marched away, bumping right into someone. Not even caring to apologize, she kept walking. Her vision was on the entrance to this place and exiting it as quickly as she could.

“Leaving so soon?” the bouncer asked.

“Yeah, nothing but creeps here tonight.” The cool air soothed her over-heated body as she hurried to her car. 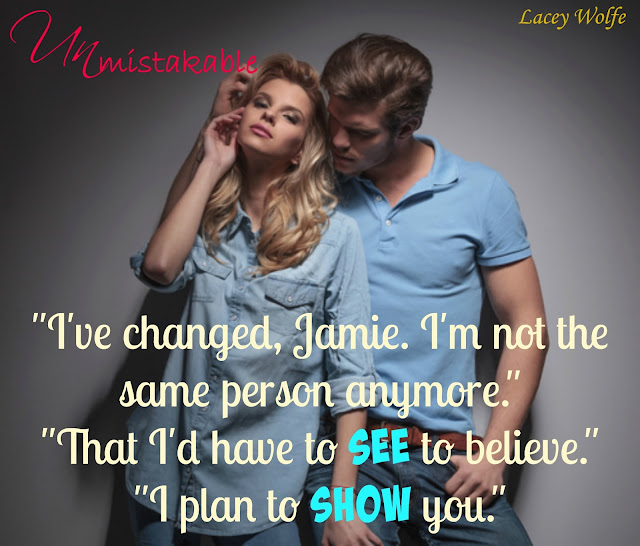 Let's be honest, when you get a warning that the hero of story starts off on the wrong foot at the beginning, you might get a little wary of actually reading the entire book. But sometimes, you have to get him the benefit of doubt and take a chance on him, to believe that he can change. You have to trust the author's ability to take a not-so-likable guy and make me the man worthy of your heart.

So when the time came to read this story, I went into it with an open mind. I admit that I had a stop a couple of time to just scream at Chandler and maybe pull out my hair. Sure Chandler older but he's got give a guy in his 20's a run for their money, sex appeal. The only problem is that he never saw him settling down or having children. So much so that he's taken steps to prevent that from ever happening. So when Jamie drops that bombshell, to say he was shocked is a bit of an understatement. And thus, his actions cause him to appear less than stellar.

Jamie has always been the strong, independent type, and now having to face this life changing event on her own only proves how strong she can be. Sure she wanted Chandler to be there, but things didn't work out that way. Even after time has passed, she still thinks about him but she won't let that get her down. She knows it's time to move on.

But of course, what's the fun in that? Fate throws them together in the most unlikely of places. Chandler is so happy to see her; she's be on his mind more and more lately. He's never forgotten her and now fate has placed her right in front of him.

Now he's more determined than ever to win her back. It's going to be tough battle, but he knows what he wants and it's a life with Jamie. Jamie wants to believe him, but too much time has passed to jump back into anything. Can she forgive his words and actions? Can she believe he's a changed man? Can she risk her heart? But more importantly, can she risk her children's heart?

Lacey had her work cut out for her, however she persevered to give us a story that is an emotional roller coaster with it's ups and down but a journey worth taking. Although Chandler is older and has money to burn, he doesn't flash it around like a snob, but is down to Earth. He's respectable, charming, caring, and about all, loyal. Jamie is someone that you want to be friends. She'll be a shoulder for you to cry on, an ear to listen to whatever you bothers you, someone to laugh with, and someone that will take you out and have a great time with. A defiant girl next door. Together they make a perfect couple. Thank you Lacey for taking the chance on Chandler.

Any fan of Lacey Wolfe would love this intriguing story. And if your new to Lacey, this is a good book to sink your teeth into. This is a well written book that any fan of romance would enjoy. 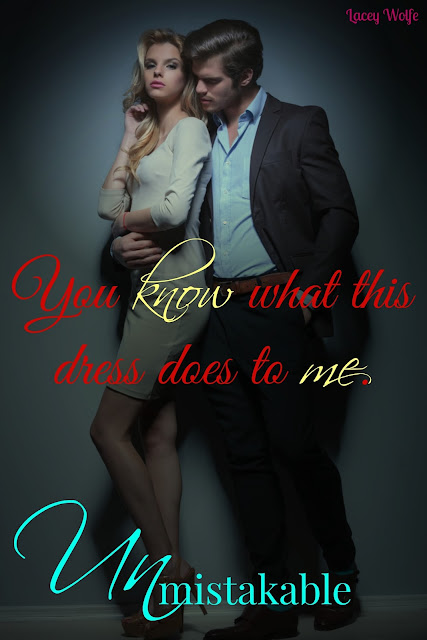 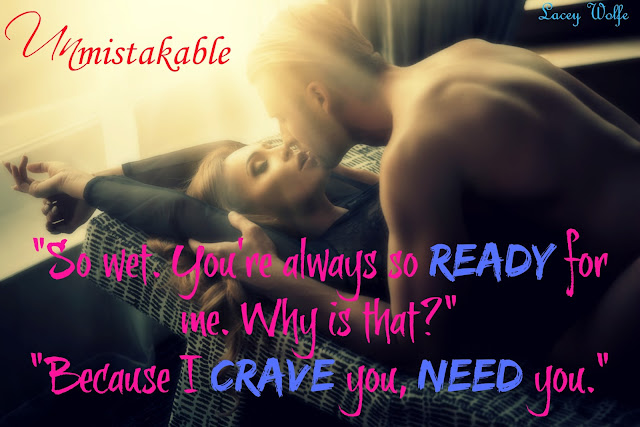