Everyone knows you should never say never.

Cooper Moore never saw Maggie Williams coming. She was just his best friend’s little sister, the curly-haired, freckle-faced girl from Mississippi who was absolutely off limits. And he never thought about her any other way — not until he saw her that night, broken and brave. From that moment on, he knew he’d do whatever it took to protect her, even if it meant he had to stay away.

Maggie never expected to find her fiancé banging her maid of honor an hour before she was set to walk down the aisle, but life’s funny that way. The only option to save her sanity is to get the hell out of Jackson and move to New York where her brother lives. The only downside: Cooper is there too. And she just doesn’t know if she can stay away from him — the filthy rich, dead sexy playboy who’s allergic to commitment.

The second Maggie sees him again, she realizes he’ll be impossible to resist. Luckily, commitment is the last thing on her mind, and Cooper is the perfect escape. As long as she can keep her heart in check, everything will be just fine. Because she can never have feelings for him. Or at least that’s what she’ll keep telling herself.

Chaser is a standalone romantic comedy and book 2 of the Bad Habits series.

Cooper grabbed me by the hips and dragged me to the end of the bed where he knelt. I gasped — somehow, I was completely naked, but he was fully clothed, smiling up the line of my body, that crooked smile of his that made my insides turn into mush. My thighs rested against his shoulders, and his eyes were smoldering hot, locked onto mine as he closed his lips over me and sucked. Hard.

That’s what I tried to say, at least, but I think it sounded more like Humuguh. Not that Cooper needed clarification. His eyes closed, dark lashes against his cheeks, fingers digging into my hips as he licked and sucked, sending tremors up my thighs when he moaned softly against me. My eyes slammed shut, and my chin pointed at the ceiling as my fingers twisted in his dark hair. Within seconds, I was rocking against him with my heart doing its best to escape my ribs and the rest of my body begging him to keep going.

He broke away. I cracked my lids, which weighed about seven pounds each, and glanced down at him. His face was turned toward the closed bedroom door, with alarm written in every angle.
And then I heard the front door close.

Cooper looked back at me, blue eyes wide, and we stared at each other for one stunned second before bursting into action. I rolled out of bed with wobbly knees, and he stood, scanning the room for a place to hide.

Here’s the problem: No one knew Cooper and I were hooking up.

Here’s the bigger problem: My brother, West, might actually kill Cooper if he found out. 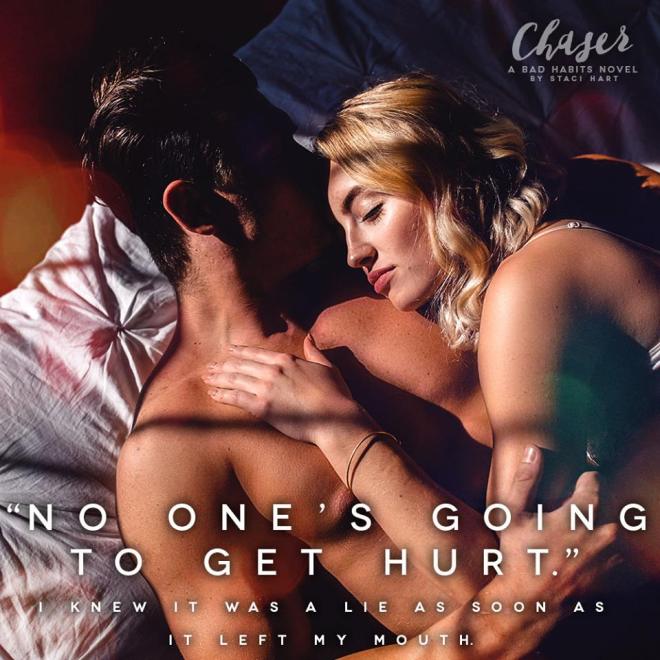 This was a page turner from the get-go. Staci has a brilliant way of telling a story of a well known plot line in a way that captures the readers attention like no other.

Maggie and Cooper are easy to fall in love with, even with Cooper's playboy status. Although they "never" should have wanted to be together, they can't help their attraction. So Maggie's plan seems like a perfect idea, but the more they get to really know each other, the more they can't stay away. But it's not all sunshine and roses, there is a bit of drama there. Alas, have no fear, Staci finds a way to have our couple acheive their happily ever after.

I would defiantly recommend this book to anyone looking for a sexy, funny, heart-warming RomCom. I really enjoyed this second book in the Bad Habits series and can't wait to see what Staci brings us next.

Staci has been a lot of things up to this point in her life -- a graphic designer, an entrepreneur, a seamstress, a clothing and handbag designer, a waitress. Can't forget that. She's also been a mom; she has three little girls who are sure to grow up to break a number of hearts. She's been a wife; even though she's certainly not the cleanest, or the best cook. She's also super, duper fun at a party, especially if she's been drinking whiskey. Her favorite word starts with f and ends with k.
From roots in Houston, to a seven year stint in Southern California, Staci and her family ended up settling somewhere in between and equally north, in Denver. They are new enough that snow is still magical. When she's not writing, she's sleeping, gaming, or designing graphics.