Available on Amazon for $0.99 or read for free on Kindle Unlimited 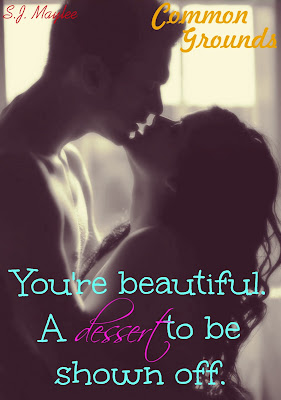 While Kate Sanderson mixes batter and pumps buttercream inside her tasty creations at the West Egg restaurant, she dreams about two things: owning a bakery and finding a man capable of satisfying her every desire. Mark Larosa designs little masterpieces daily at his tiny barista station at the local Star Coffee and he tailors each drink to the customer. The only cup he can’t seem to get right is for the sassy baker, Kate. He’s determined to give her what she really wants.

When a new building goes up across the street, the pair trip over each other trying to grab the last unit before a chain restaurant claims their dream. To get what they crave, they might have to work together and find the elusive common ground.

“Mark! I was hoping you’d make it.” Sam crossed the room and barrel-hugged him.

“Sorry I’m late. I went to the club first.” He caught Kate’s gaze from across the room. The man looked more delicious than she remembered. His V-neck shirt hugged his upper body in a way that made her envious.

“Well, you’re here now, buddy. Come on in. Kate has a spread for us. You can take your pick.”

She coughed to hide her gasp and made her way out to the back patio. The evening had yet to cool, but she still shivered. Hiding was not how she intended to handle things. Facing him now after thinking about him all day wasn’t an option either.

The small wooden platform was normally her oasis except the muffled sounds of the party inside wouldn’t let her forget where she was. Their corner lot didn’t offer them privacy but they couldn’t argue with the location. They were in the center of everything. She turned around and found the cause of her troubles coming outside. Her gaze shot to ten different places, anywhere but him.

“Just the woman I was looking for.” He closed the door behind him and then crossed the deck in an easy stride.

“Excuse me.” She stepped to get around him. A quiver rolled through her belly. “I was just going back inside.”

“I’ve been searching for you all night.” He blocked her path. “I’d hoped to find you at the club tonight.”

“Why?” He probably wanted a repeat performance. Her thoughts filled with all the naughty things he could do if he came closer. She shook her head. No way was she letting this guy near her again. Falling fast and getting her heart stomped was not on her to-do list.

“I wanted to apologize.” The low tone of his voice sank deep into her senses.

“That’s unnecessary. Not everyone can make a good cup of coffee.” She gazed into his deep blue eyes. Her pussy warmed at the sight of him. She shuffled back until she reached the railing, needing to keep her thoughts clear and her heart away from becoming easy pickings.

“What?” He stepped in next to her, clearly not deterred.

“I hope you have other skills because I don’t think you have a future in coffee.” She grabbed hold of the patio ledge. The lie sounded catty, but she hoped it would do the trick and cement a wall between them.

She flipped her hair over her shoulder. “If you mean smart enough to stay away from players like you, then yes, I am one of those girls.” She put her hands on her hips.

He removed all the space between them. His thigh brushed hers. “Well, I tried one of your croissants today.”

“And?” She sucked on her bottom lip and pressed out her breasts.

“It was okay.” He leaned over her. His lips were within reach.

“What? That’s ludicrous. My baking is far from just okay.” She took a step forward, intending to put distance between them. He didn’t let her get away. When her body met his warm strength, she melted and moaned from somewhere deep within.

“I’ll tell you what’s ludicrous.” He grabbed her ass. “All the effort it’s taking you to deny what you feel when you see me.” The tone of his voice chipped away at the last of her reserve.

“That’s crap.” She pushed on his chest and got nowhere. “You didn’t even want to talk to me at your coffee house.”

“That’s not true. It doesn’t count if you didn’t want to be recognized.” He tapped the end of her nose.

“You don’t know what you’re talking about.” She swatted at his hand.

“I can hardly wait to hear it.” She grabbed the ledge on either side of her.

“How about you leave all the fancy baking behind and stick with something simple, like a donut?”

“It is. You disagree?” He brought his lips close to hers.

“Donuts require finesse, actually. A trait I manage skillfully. I’ll tell you what.” She licked her lips. “I’ll make you one of my cronuts. Do you even know what that is?” She couldn’t remember ever letting a guy get her this worked up. Just the thought of him standing in her kitchen had goosebumps dancing up her back.

“I do. It’s some kind of croissant-doughnut.” He inched closer, removing all the space between them.

“It’s fried decadence that will blow your mind.” The heat building inside cracked through her barriers. She raised her leg and pressed her pussy along his hard cock. “Is that an invitation?” He took a deep breath and rocked against her.

“To eat? Absolutely.” She licked her bottom lip. 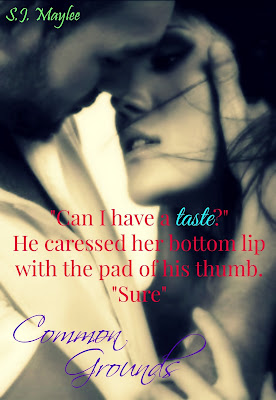 Common Grounds is a short, yet very delicious story about a chance encounter that turns into something spectacular.

Kate's confections pair wonderfully with Mark's heavenly coffee. Their talents are superb alone, but together they are are force to be reckoned with.

I love that Kate is an everyday kind of girl just trying to make her dreams come true. Although she's happy were she is with her career, she is striving for more. Her determination to succeed will not be hindered by those that tell her no.

Mark is new to the area, but is already making a name for himself. He too is determined to succeed, although his road may be a little less bumpy than Kate's. I love his attitude about his job and his confidence shines through everything he does.

Kate and Mark's chance encounter at the Club is sizzling. They way they meet and scene is thrilling to observe. To be that free and express yourself in that manner would defiantly be something to behold.

Although they each want to be with the other, they have a bit of miscommunication. But after all is said and done, the fire between the two cannot be contained. Their passion is evident with every passing page.

I loved this story completely. It is a delectable morsel that leaves you hungry more. 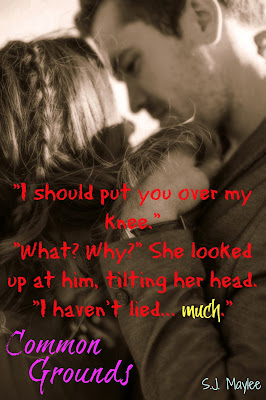 S.J. Maylee fell in love with storytelling at a young age and with it came a deep-seated desire for everyone to find their happily ever after. She’s finding the happy endings for her characters one steamy story at a time.

When she’s not reading or writing, you can find her caring for her garden, laughing with her two young sons, or dancing to her husband’s music. She’s a PMP (Project Management Professional), Nia instructor, and coffee addict.

As a writer she has a tendency to break hearts, but she always glues them back together.

Where You Can Find Books By S.J. Maylee

*Common Grounds was originally published in the Just Desserts Collection which is no longer available. It has been re-released with extended scenes.*
Posted by Unknown at 02:00