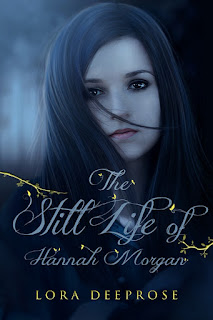 Hannah Morgan's life is at a standstill. Her dreams of becoming an artist vanished with the sudden death of her grandmother and mentor. To appease her distant and disapproving mother, Hannah gets a respectable job at a high-end day spa.  Instead of painting masterpieces, Hannah spends her days painting nails and giving facials to wealthy women. Her dreams for the future have become a hideous nightmare. And it just keeps getting worse. She catches her boyfriend cheating, loses her job, and has to watch from the sidelines as her best friend, Jasmine Blue, goes after her own dreams of owning her own salon.  Then she meets Aaron, a working artist, and finds in him a kindred spirit. And, to her surprise, she finds the courage to follow her dreams. When circumstances beyond her control threaten to destroy both her relationship with Aaron and her dreams of a bright future, Hannah fears her mother was right-that some dreams aren't meant to come true.

“As a small child I dreamed of growing up to be a chestnut mare. I was terribly disappointed when I found out people couldn’t magically transform into animals but I got over it by immersing myself in the world of fairy tales and thus began my lifelong passion for reading and make-believe.”

Lora Deeprose has a B.A. in Drama with a minor in History. She was born in the small town of Fort Saskatchewan, Alberta; the middle child of five girls.  In 2006, she and her eldest sister moved to a hobby farm in the remote Kootenay area of British Columbia and for five years had several country adventures which included raising chickens and goats, encounters with wildlife and wrangling the neighbour’s horses. Currently she lives in BC’s Eastern Fraser Valley.

Oh my God!  What did I do?  I stared down at the waxing strip in my hand.

Just take another look.  Maybe it’s just a trick of the light.  I tried not to panic.

I stole a quick glance at my client’s face, at her eyebrows in particular, and confirmed my worst fears.  It was not an illusion caused by bad lighting.  I had removed Mrs. Weatherbee’s entire left eyebrow.
I held the strip up to my face, squinting at it just to be sure.  There, embedded in the wax, was her missing eyebrow.

“Why have you stopped?”  Mrs. Weatherbee opened her eyes and looked up at me from the treatment table.  “Is there a problem?”

Was there a problem?  Well that depended on whether or not she thought walking around with one eyebrow was a bad thing.  Maybe she could start a new fashion trend.

“Uhm.”  I quickly threw the offending wax strip in the garbage.  Maybe if I just drew the missing eyebrow back on she wouldn’t notice.

“Hand me a mirror.”  Mrs. Weatherbee heaved her considerable bulk up from the treatment table.

I obeyed, passing her a small silver mirror.  I looked down at my hands while she examined her face.  Perspiration beaded my forehead and trickled down my neck.

Terence was going to kill me.

“I’m really sorry, Mrs. Weatherbee, it was an accident.”

“An accident?  Do you realize what you have done to me?  I want to speak to Terence!”

“Now!” she screamed, her voice reaching an even higher pitch of hysteria.  She looked down at my nametag, “Hannah!”

Startled into action by the sound of my name, I nodded and hastily retreated from the room.

Maybe, if I just kept on walking and headed out the front doors, no one would notice.  But, then what would I do?  Where would I go?  I could join the circus and work as a trapeze artist, or maybe I could be a spy for the Canadian Government.  Do we even have spies in Canada?

Instead of running for freedom, I headed down the hall, through the Great Room, where several robe-clad guests were relaxing between services, and around the corner to Terence’s office.  I stood there for a moment staring at the brass nameplate on his door.  Taking a deep breath, I knocked softly.  Maybe he wasn’t in today.  Maybe he’d won the lottery and quit his job.  Even better, maybe he contracted scarlet fever and wouldn’t be in for months.

I opened the door and stepped in.  Terence was sitting behind his desk typing madly on his computer, his long spider-like fingers scuttling furiously across the keyboard.  His thick black frames were perched at the end of his pinched nose while his eyes, so dark they looked like tiny chunks of coal, remained glued to the computer screen.

I looked over his shoulder at the large Carrico print, entitled The Unknowable, hanging on the wall behind him.  I loved the precise lines and balance of the white geometric shapes floating against the slate blue background.  But I cringed inside because I knew that Terence chose the picture, not for its beauty or purity of form, but because it matched the cool blues and silvery grey tones of the minimalist decor in his office.

“Sorry to bother you but—” I said.

“Make it quick, I’m in the middle of something.”

Terence’s fingers stopped in mid-air.  He looked up and pinned me with his beady eyes, his normally baby smooth forehead furrowed with wrinkles.  “What have you done now?”

“Nothing, really.  I was doing an eyebrow wax on her, and I seem to have accidentally removed too much.  And... she wants to see you.”

Terence stood up and moved towards the door with lightning speed.

“Mrs. Weatherbee is one of our Gold Card Members.  If you did anything to jeopardize the reputation of this spa, I will have your head on a platter.”

“Be quiet and follow me,” he barked, heading out the door.  Terence sped down the corridor to the waxing area with me following behind.

“What room is she in?” he asked over his shoulder.

“One,” I replied, finally catching up to him.

Terence knocked on the door, called out Mrs. Weatherbee’s name, and walked in without waiting for her to reply.  Mrs. Weatherbee sat on the edge of the treatment table where I’d left her, still holding the mirror in front of her face.

“Mrs. Weatherbee,” Terence’s voice softened and filled with concern.  “What seems to be the problem?”

She slowly lowered the mirror onto her lap.

“Oh my!”  Terence took an involuntary step backwards bumping into me.  I stumbled into the wall but managed to stop myself from falling.  He turned to me, his eyes narrowed and his nostrils flared like an angry bull.  “Wait outside.”

I scrambled out of the room barely making it over the threshold before Terence shut the door.  I stood out in the dimly lit hallway awaiting my fate.  After a few moments, when Terence hadn’t come out, I closed my eyes and listened to the music floating down from the speakers hidden in the ceiling.  I tried to let the gentle surf sound and Celtic harp music calm me.  I listened to the hushed voices of people talking in the Great Room and wished I could be anywhere but at work.  I wished I could start this horrible day over and make the outcome different.

Earlier, I thought my day couldn’t get any worse.  Now I was going to be canned.  All because of one little eyebrow.  It wasn’t like I scarred her for life or cut off a limb.

Maybe I’d get off with a slap on the wrist.  I had worked at the Serenity Day Spa for almost three years, and this was the first time I had done anything really bad.  I mean, calling in sick because of a hangover or forgetting a client in a mud wrap and going home didn’t really count.  I clung to that thought.

Fifteen minutes later, the door opened and Terence stepped out.  At five foot nine, Terence wasn’t much taller than I was, but as he walked towards me, his anger transformed him into a towering menace.

“You,” he whispered, jabbing his finger in my face, “will report down to the laundry room for the rest of your shift.  I’m moving your clients over to the other girls.  I’ve done what I can to smooth things over with Mrs. Weatherbee.  You can consider yourself lucky that I didn’t fire you on the spot.”
I relaxed a bit.

“Well, what are you standing around for?  Go! Go! Go!”  Terence waved his hands in my face, shooing me away.

I turned to leave, but Terence stopped me before I could even take a step.

“And Hannah, you will report to my office tomorrow at eight-thirty a.m. sharp.  Understood?”

I should have expected this.  I had gotten off way too easily.  I knew Terence wanted to prolong my punishment and state of panic as long as he could.  He got off on seeing other people squirm.

I straightened my shoulders and headed through the spa, past the Great Room, and down the small corridor that led to the basement stairs.  As I passed some of my coworkers in the hallway, the heat rose in my face and I struggled not to cry.  They looked at me curiously, but no one had the nerve to say anything.  One of the strictly enforced rules at Serenity was no unnecessary talking or socializing amongst the staff while on the floor.  Besides, the whole spa would know what happened by the end of the day.

The thing about working with a bunch of women was that gossip was more popular than the chocolate body scrub on Valentine’s Day and spread through the spa in less time than it took to remove an eyebrow.  I admit that I enjoyed my fair share of whispering in the halls and passing on juicy tidbits about the love lives of my co-workers or which client had recently had plastic surgery.  But now I was about to be the subject of conversation.  I could already imagine the hushed giggles that would stop abruptly to be replaced by that uncomfortable silence that lets you know you’ve just walked in on a conversation about you.  Somehow, gossiping didn’t seem like such a harmless pastime when I was going to be the topic.

I heaved open the heavy, metal door that led down to the basement.  As it swung closed behind me, hot, angry tears spilled down my cheeks.