"The snare is set—leaving, friendships, lives, and futures dangling in the balance"


The thrills, heat, and suspense continue to add up...


One sexy, possessive alpha and one spunky, determined heroine


One week of uncontainable, unbridled passion


The sum of intertwining pasts, lies, and broken rules


"Infidelity - it isn't what you think"

Don't miss this latest novel in the Infidelity series from New York Times and USA Today bestselling author Aleatha Romig. The classic twists, turns, deceptions, and devotions will have readers on the edge of their seats, discovering answers that continue to pose questions. Be ready to swoon one minute and scream the next.

Entrapment is the fourth of five full-length novels in the Infidelity series: Betrayal, Cunning, Deception, Entrapment, and Fidelity.

*This series does not advocate nor does it condone cheating.

The car slowed as the large iron gate moved to the side. I fought the urge to look through the back window to see if Clayton and Deloris were still behind the limousine. I feared that if I did, I’d alert Alton.

“They won’t be allowed in,” he said with more than a hint of disdain. “Ever.”

My heart sank as I turned to the back window and watched the gate close. The limousine’s tires bounced against the long driveway as we moved beneath the giant oak trees.

“When we enter the manor,” he continued, “go directly to my office. Suzy and Bryce will be there. I have a few things to discuss with the front guards. Remember what I said. Your refusals and disrespectful tone are done. Don’t make me refocus your attention again.”

I fought the nausea twisting in my gut as the car came to a stop on the circular cobblestone driveway.

Before the door opened, Alton leaned closer, his hand once again on my knee. “In each directive, Alexandria, I want you to ask yourself two questions.”

His words were heavy chains, securing my obedience as well as my captivity. I didn’t dare speak for if I did, I’d surely say something I’d regret, something to cause him to refocus me.

“Ask yourself,” he went on, “do I want to see my mother? And do I want her to get better?”

The door opposite me opened, flooding the interior with light. Though it came with a blast of warm Georgia autumn air, my flesh prickled with a familiar chill.

Before I could move or speak, Alton squeezed my knee. “I’m waiting.”

Swallowing the bile, I replied, “I want to see her and I want her better.”
“Very well. Remember that.” He motioned for me to get out first.

Lowering my sunglasses over my eyes, I accepted Brantley’s hand.

Not acknowledging his words, I looked up and up toward the tall walls filled with windows. There was no need to correct the name Brantley had used to address me. Instead, I forced myself forward, step by step, as my flat shoes moved over the cobblestone toward the opening front door.

One week. No future. No past. No more.

Alexandria Collins has one week to live carefree—no ghosts of her past or pressures of her future haunting her. Reinventing herself as "Charli," she is knocked off her feet by a sexy, mysterious man who brings her pleasure like she never imagined. With her heart at stake, she forgets that decisions made in the dark of night reappear in the bright light of day.

"Some of my tastes are unique. They aren’t for everyone. I understand that.”

Lennox "Nox" Demetri is wealthy, confident, and decisive—he knows what he wants. From the first time he sees Charli at an exclusive resort, he knows he wants her. Although he is usually the one to make the rules, together they agree on one:

One week. No more.

When betrayal comes from those closest to Alexandria, she must decide how far she is willing to go to survive. Choices are not always easy, especially when they involve the heart, body, and soul. After all, Infidelity is a business, and some rules are meant to be broken.


"Is it really cheating if you're doing it to yourself?"

From New York Times and USA Today bestselling author Aleatha Romig comes a sexy, new dominant hero who knows what he wants, and a strong-willed heroine who has plans of her own. With classic Aleatha Romig twists, turns, deceptions, and devotions, this new epic dark romance will have readers swooning one minute and screaming the next. Have you been Aleatha'd?

Betrayal is a full-length novel and the first of five in the Infidelity series.

"He owns you. Whatever he tells you to do you do".

One year. No future. A past that won't go away.

Lennox "Nox" Demetri broke his own rule by making a deal. It may not have been directly with the devil, but that doesn't mean Satan himself isn't watching. Was it fate that brought Charli into his life and his bed? What will happen when rules are broken and secrets are revealed?

Alex "Charli" Collins found pleasure with Nox like she'd never known. That was before she knew his last name. Now that Infidelity is involved and the rules have changed, what will result when real life and fantasy collide?

Is it really cheating if you're doing it to yourself?


From New York Times and USA Today bestselling author Aleatha Romig comes a sexy, new dominant hero who knows what he wants and a strong-willed heroine who has plans of her own. With classic Aleatha Romig twists, turns, deceptions, and devotions, the depth of this new, epic dark romance reaches new levels and will have readers swooning one minute and screaming the next.

Cunning is a full-length novel, 360 pages, and the second of five books in the Infidelity series.

Infidelity - it isn't what you think.

It all began in Del Mar, a chance meeting with a single rule--one week only.

Lennox ‘Nox’ Demetri and Alexandria ‘Charli’ Collins had every intention of following it but rules are made to be broken. In Cunning they are reunited with Nox setting down new rules for the game and Charli having no choice but to follow them.

Now, once again, the game has changed. Nox and Charli’s hot sensual encounter has grown into something more but it is threatened with secrets and regrets. Is it their love and intense sexual chemistry that’s pushing them together or something darker, a puppetmaster behind the scenes pulling the strings on their love affair?

Shadowy villains lurk around each corner and everyone is suspect as Nox’s and Charli's pasts collide with the present and threaten to compel them back to their predestined fates.

Can deals brokered in the past be negated by something as pure as love and as steamy as the attraction shared by Nox and Charli? Or was it all a deception—starting with that very first meeting?


"Infidelity - it isn't what you think"

From New York Times and USA Today bestselling author Aleatha Romig comes a sexy, new dominant hero who knows what he wants and a strong-willed heroine who has plans of her own. With classic Aleatha Romig twists and turns, the depth of this epic romantic suspense continues to reach new levels as past and present intertwine. The Infidelity series will have readers swooning one minute and screaming the next.

Deception is a full-length novel, over 300 pages, and the third of five books in the Infidelity series - It isn't what you think! 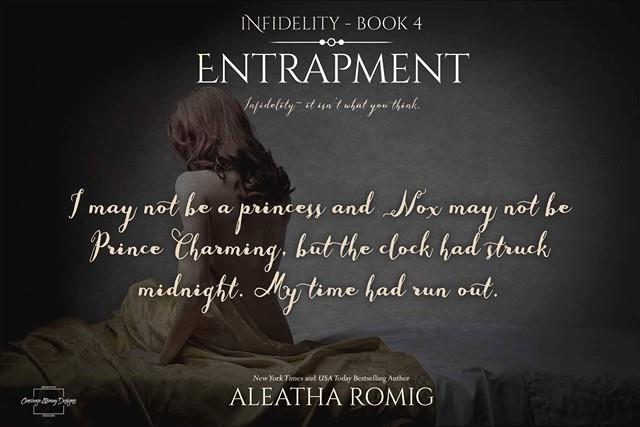 Aleatha Romig is a New York Times and USA Today bestselling author who lives in Indiana. She grew up in Mishawaka, graduated from Indiana University, and is currently living south of Indianapolis. Aleatha has raised three children with her high school sweetheart and husband of nearly thirty years. Before she became a full-time author, she worked days as a dental hygienist and spent her nights writing. Now, when she's not imagining mind-blowing twists and turns, she likes to spend her time with her family and friends. Her other pastimes include reading and creating heroes/anti-heroes who haunt your dreams!

Aleatha released her first novel, Consequences, in August of 2011. Consequences became a bestselling series with five novels and two companions released from 2011 through 2015. The compelling and epic story of Anthony and Claire Rawlings has graced more than half a million e-readers. Aleatha released the first of her series Tales From the Dark Side, Insidious, in the fall of 2014. These standalone thrillers continue Aleatha's twisted style with an increase in heat. In the fall of 2015, Aleatha will move head first into the world of dark romance with the release of Betrayal, the first of her five novel Infidelity series.

Aleatha is a "Published Author's Network" member of the Romance Writers of America and represented by Danielle Egan-Miller of Browne & Miller Literary Associates.