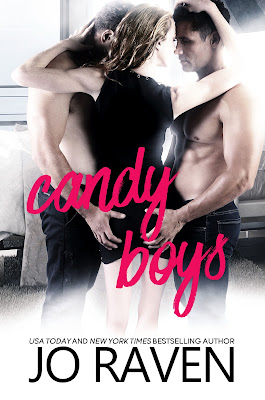 Meet my fantasy boyfriends. Aren’t they just the sexiest, cutest thing? I know, right? They totally are. They are hot, too hot for a quiet—and obsessed with them—girl working in a bookshop.

There’s also the tiny problem of Joel wanting another girl. And as for Jethro, well… he doesn’t do girls. Or maybe he doesn’t do relationships. He certainly doesn’t do boys, so he isn’t doing his best and very male friend… right? Much less his male friend and me at the same time.

So it’s fine to crush on them. And write a serial story on my blog in which we have tantric sex in every possible position.

All three of us. Together. Touching, and licking, and sucking, and screwing.

I mean, it’s okay. It’s perfectly safe. They’ll never even know I exist, much less find out about my blog and my secret fantasy about them.

Warning 2: This book may set you on fire. Handle with caution.

Warning 3: This book is funny, and dark, and angsty. It is NOT a love triangle. It is a relationship between three people with a happy ending.

“Screw talking.” He moans in my mouth, the vibrations traveling from his broad chest to my body, making me clench with need.

“I want you,” I whisper, and he moans again.

“Oh yeah. Tell me what turns you on. What your fantasy is.”

“That’s what I’ve been trying to tell you.” I lick his lips, inviting him to kiss me again, to stop my confession, but it’s not enough to stop the words. “I want you, Jet. And Joel. I want what you want, and I can’t…”

Jet’s breath hitches, his lashes sweeping low on his cheeks. “Can’t what?”

“Can’t choose between you. Don’t you see?” The truth is finally out. It was choking me all this time. My eyes sting, because I know he’ll push me away any second now. “I’m sorry. I should have said it from the start. I should—”

“What exactly are you saying, Sugar Pop?” He drops back on the sofa, brows knitted. “Are you walking away?”

“No. You have no idea…” I shake my head, my cheeks on fire, my heart thudding heavily in my chest. “I want you both. Here. At the same time. With me. God, I can’t believe I told you.”

“Fuck, you have any clue what you’re doing to me? What you just said…” His gaze is full of wonder, wide and hot. His hands move down my back, finding bare skin under my blouse, scorching brands. “Come here.”

He pulls and tugs until I’m fully seated on his lap, his hard cock pressing sideways against my inner thigh.

I brace my hands on his shoulders, gripping the thick muscles there as he kisses me deeply, so hard my lips hurt. His stubble scrapes over my chin.

It’s hot. He’s so frigging hot, I can’t even think, can’t do anything but fall into the kiss.

Then a low male voice says from behind him, “Harder, Jet.”

A shadow falls over us. Someone comes to stand behind the couch and slides a hand into Jethro’s wild hair. Familiar blue eyes dart from my face to his.

“Kiss her harder.” His hand slips down Jethro’s face to his jaw, and he leans down to whisper close to his ear, “I wanna watch.” 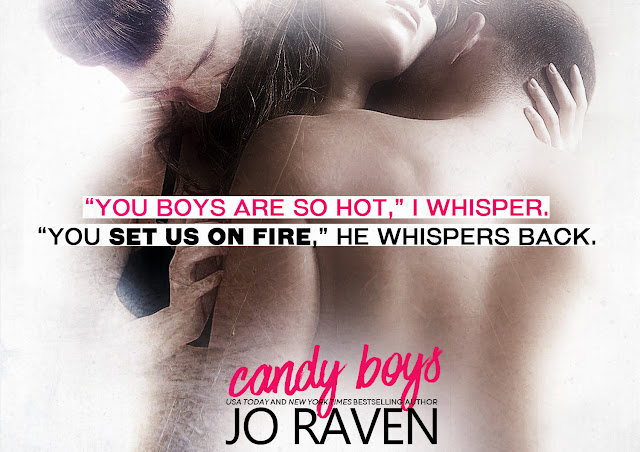 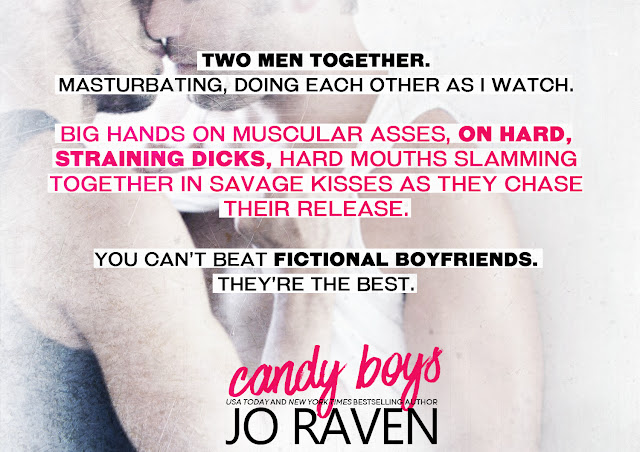 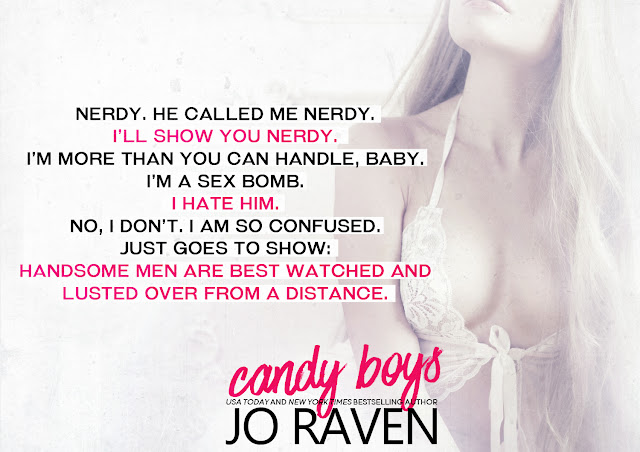 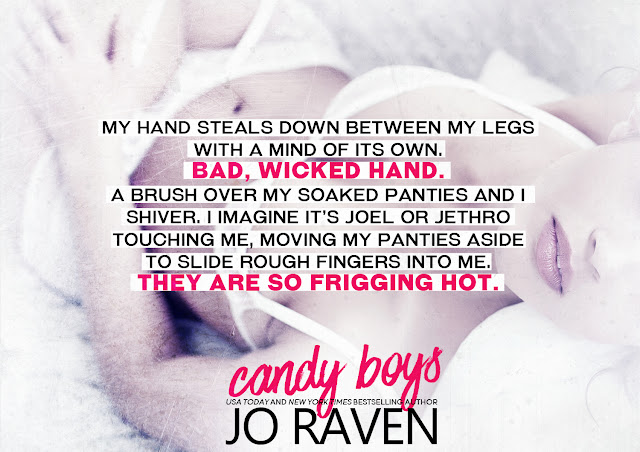 Holy smokes Batman, Candy Boys is super hot, super intense, and super captivating. I could not put this book down until I had devoured each and every morsel of this unconventional love story.

Candy is a spitfire online, but timid in person, well at least until she gets comfortable with you. That is something that I can relate to. Her desires are not simple, and the men she's been dreaming about are not what she thought they would be. I love that once in between Joel and Jethro, she comes alive and pushes them as much as they push her.

I love Candy's heart, it's true and pure. When her fantasy world started to collide with her real world, I love how she wanted to protect her boys. She may share in the bedroom with her two boys, but sharing them in her blog with her fans isn't something she's comfortable with. She love them completely and won't let them push her away.

Joel and Jethro is so different in so many ways, but together they make a very tempting combination.  Neither thought there would a woman out there that would make all their dreams come true, but once they laid eyes on Candy, they both went after her. And in the bedroom? Hot mama! Those boys deliver over and over and over again.

I really enjoyed this book and all the sexiness that is contained between the pages. Jo's storytelling captures you from the beginning and doesn't let up until the succulent conclusion. This was my first book by Jo but I know it won't be my last.

Meet Jo Raven online – on Facebook, chat with her on Twitter, join her readers group for sneak previews of her covers and stories.