My college boyfriend and I had only been dating for about a month when Valentine’s Day was coming up. He hinted he had a big surprise for me.

“Are you going to be home Tuesday around five o’clock?” he asked.

“Because that’s the time the delivery truck is coming.”

We’d only been going out for a month! I couldn’t imagine what he could have bought that would require a delivery truck, except that it must be too big and too expensive—and inappropriate for relationship only a month old. Rather than being pleased, I was upset, angry. We ended up getting into a fight over his mystery gift.

Valentine’s Day (Tuesday) rolled around and at 5 p.m., there was a knock on my apartment door. With trepidation, I opened the door, and there on the ground was a tiny toy truck. In the back of it was small wrapped box, which turned out to be a bottle of my favorite perfume. An entirely appropriate gift.

I’d blown it. He’d tried to surprise me, but I’d gotten mad and created drama and spoiled a romantic and appropriate gesture.

Janelle, the heroine of Wife on the Lam in Domestic Discipline spoils a gift from her husband. It’s their wedding anniversary, and Janelle hints to Brent that she’d like to take an island vacation. He wants to surprise her so secretly he books the island vacation she wants, but tells her he has to work on their anniversary. Thinking he’s blown off their special day, she gets mad and runs away on vacation by herself. Brent follows her to the resort. The sparks and spanking begin!

Have you spoiled someone’s big surprise? Did you try to surprise someone else but have it ruined?

The only person to board so far, she sank into a seat midway down the aisle curbside, grateful for the air conditioning. After only a short jaunt from the building to the van, perspiration dampened her skin. She plucked at her cotton capris stuck to her legs. She wouldn’t need the slacks she’d packed. Just shorts, tanks — and the swimsuit. If she had the guts to wear it.

She’d bought the suit to surprise Brent before she hatched her impromptu plan. He’d always liked her ass. She sighed and lifted her hair from her nape. Should she contact him? Start damage control?

Could she call the States from Isla Island? Because Brent traveled so much they had a comprehensive cell plan. She powered up her phone. Seconds later a text message beeped through. Her hand shook as she recognized Brent’s number.

Can’t believe U did this. Where R U?

She texted him back. Cabana Resort, Isla Island. I’m sorry.

She widened her eyes when seconds later a response popped up. He must have been waiting for her message. She could imagine his fury. Fortunately she was hundreds of miles away. Of course, if she hadn’t been hundreds of miles away, he wouldn’t be mad. With any hope, he’d cool off some by the end of the week. Or would he be angrier by then?

U R in so much trouble. B there Thurs.

Did that mean what it sounded like? She gulped. U R coming here?

Talk was often a euphemism, but of course she wanted him to join her. Her heartfelt wish had been for her and Brent to take the trip together. And she was ninety-nine percent sure he wouldn’t spank her at a resort.

Little does she know…. 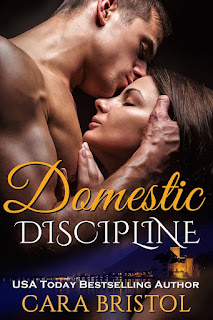 Wife on the Lam

Janelle wants to take a luxury vacation for her wedding anniversary. Despite numerous hints, husband Brent misses all the clues and plans a business trip! Miffed, she flies off alone to a luxury resort. She’s going to celebrate—with or without him.

Brent didn’t have to work. He’d planned a second honeymoon to the luxury Cabana Resort. Janelle might have ruined his surprise, but he’s not going to let her ruin their anniversary, too. He has a little trick up his sleeve to take his errant wife in hand and get their marriage back on track.

Before her military husband left for his tour of duty, Cadence Simmons relied on Rahm’s love, direction, and protection. His absence forced her to become more independent and make decisions for herself. After serving his country, he’s home for good and eager to resume their marriage as it was before. Only Cadence isn’t quite sure she wants things exactly as they were. Can domestic discipline guide this couple through some major changes?