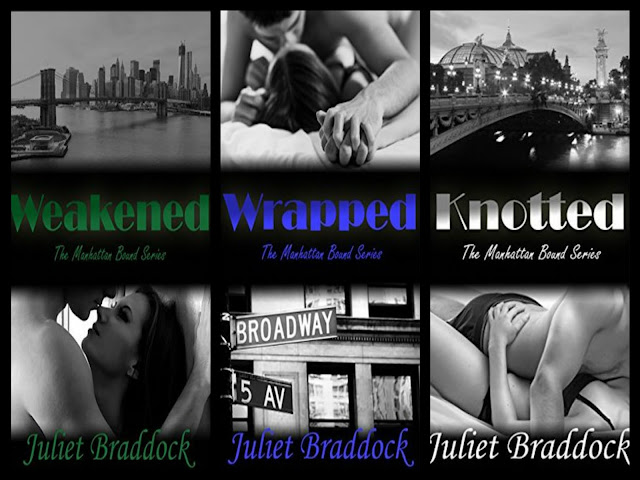 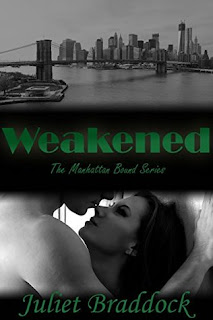 Against the glittering backdrop of New York City, budding theatrical publicist Maxine Kirk, fresh off the bus from a small Pennsylvania town, stumbles into the arms of her beloved teenage crush, unleashing desires that she never imagined.

Enter Drew McKenzie, a rising star on Broadway with dashing looks and talent to match, who masquerades behind the characters he portrays.

Instantly, Maxine finds herself lured into Drew’s high society world only to uncover a complicated man beneath the glitz and glamour of his public persona. As soon as the curtain falls, Drew sheds his stage costumes to reveal a daring Dominant side.

Titillated by his enigmatic life, Maxine clamors to discover a surreptitious and possibly perilous affair with Drew, all the while questioning her own preconceived notions on romance. Secrets surface, revealing haunting truths that test both Maxine and Drew of their own intentions. But in this high-stakes game of trust, only the strongest survive. 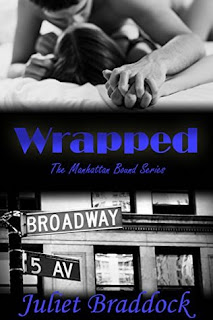 When Drew McKenzie presents Maxine Kirk with an ultimatum, challenging her to engage in his wanton brand of desire, she readily embraces her awakening hunger for a lifestyle that defies her perceptions of romance.

Entranced by Drew’s charming appeal and by his sensual assault to her senses, Maxine clamors to discover every nuance of this new relationship, ravenous to explore verboten fantasies that seem possible to fulfill only with Drew.

Along the way, he introduces her to his glamorous world of wealth and celebrity—where lavish galas and luxurious gifts are the norm—and entices her into his realm of control with his tender mode of domination.

All the while, however, they both grapple with painful emotions brought about by the extenuating circumstances of their separate pasts.

While Drew remains both confident and conscientious in his parlay of power over Maxine, his own tragic secret lurks in every shadow upon his path in life. Behind the façade of his stage persona and the origin of old Manhattan society, he struggles to hide the unforgiving reality he faced as a child.

Just as Maxine finds the strength to conquer her own torment with Drew’s patience and guidance leading her toward closure, terrifying truths begin to chip away at the surface of his composure.

As the nightmarish details of Drew’s unimaginable life emerge, he fears that this new world he’d begun to build with Maxine will crumble around him.

As Maxine finds herself embroiled in the battle to save Drew’s tortured soul from the atrocities that continue to stalk his every move, two lost souls struggling to find comfort and completion converge.

However, as Drew opens his heart to Maxine’s unwavering support, he questions his own bravery, wondering if she’ll take a bow and make her exit…or if she’ll stick around for the encore? 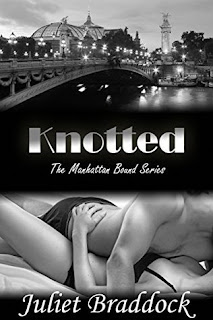 As their love continues to flourish, Maxine finds herself ensconced in Drew’s world, where power reigns in his all-consuming lust for her. From a blackout in Manhattan to a back alley in Paris to a castle in the Loire Valley, their passion knows no boundaries. 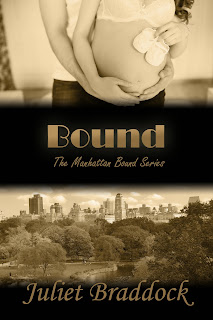 On a journey that brought young Maxine Kirk to Drew McKenzie as a novice submissive, the two lovers explored their most salacious fantasies together. In Bound by Amazon bestselling author Juliet Braddock, the fourth book in the “Manhattan Bound” Series explores how life, love and lust have flourished between these two unlikely lovers.

Through dungeons and castles in the most glamorous cities around the world, Drew. A rising star on Broadway, brought publicist Maxine’s wanton desires to life, indulging her every need with a lavish but honest display of his affection. And in the course of their relationship, they found a love that could not be shattered.

While they placed their faith in each other, the lives of their friends and families converged. Often, their sexual shenanigans took a backseat to the lives of those most near and dear to them. Their separate worlds became one.

Five years later, changes have come to their lives, and Drew and Maxine find themselves facing a life-altering decision that will impact their ordered world in ways they’d never imagined.

And while their wanderlust and pursuit of kinky pleasures never wane, they discover together that the happiest place on earth really is right in their own chaotic home.

Bound, the fourth novel in Juliet Braddock’s “Manhattan Bound” series of four books, is available at most major e-book retailers on October 11. 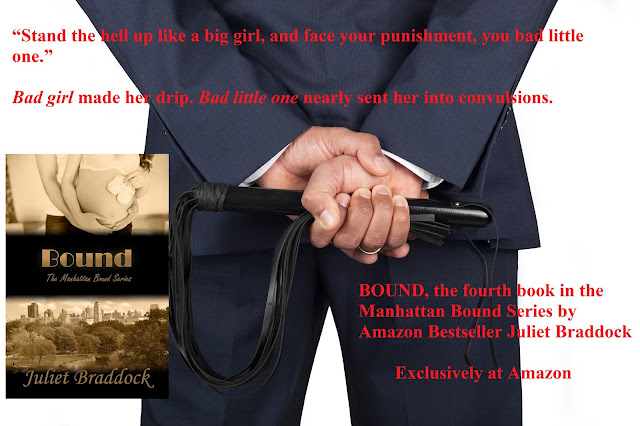 Amazon bestselling author Juliet Braddock’s first efforts in creative writing came long before she learned to put crayon to paper.  In fact, she began spinning stories in her head nearly as soon as she could form complete sentences.  As long as she can remember, she’d always created sagas about imaginary friends, family members and pop culture icons, and kept everyone around her entertained with her witty—but often very tall—tales.

Most of Juliet’s early attempts at writing romance focused on members of Duran Duran and Spandau Ballet or young leading men on Broadway.  However, as she matured as a writer, she decided that it was just as much fun to create her own romantic heroes and heroines.

At an early age, she also developed a love for big cities, and the tallest of skyscrapers were never high enough for her.  Juliet’s wanderlust would eventually lure her to New York, a city she often visited during her formative years, and her love affair with Manhattan began.  She’d promised herself that one day she would return for good.

Juliet’s passion for writing and for big cities converged, and after graduating with a degree in Journalism, she decided to set out on a journey to find her heart…just where she’d left it.
A week after her college graduation, Juliet made the big move from a small town to New York City, where she has made her home ever since.

In between building a career in communications and writing on the side, she’s indulged in international travel, theater and art.  A wine and food buff, she’s by no means a connoisseur, but she can give a few good restaurant recommendations if you’re in the city.

“There’s something so inspiring about living in a city like New York that’s so rich in culture and so very vibrant. Every neighborhood has its own story to tell,” Juliet says.  “I often do my best plotting on the subway, just observing the lives unfolding around me.  New York truly has a billion stories nestled between the skyscrapers.”

A proud Manhattanite, Juliet couldn’t live anywhere else—except for Paris, perhaps—and is a gushing cat-mom to a Russian Blue mix who was rescued as a kitten from the streets of Brooklyn.